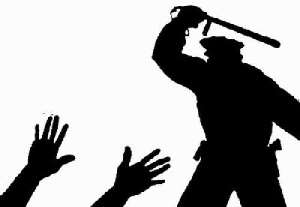 Accra, Feb. 22, GNA - The 28th February 1948 Christianburg Crossroads Shooting Incident during which the Colonial Police gunned down three Ex-Servicemen was virtually restaged when the Police and Military descended on peaceful demonstrators at the same spot on Tuesday.

The demonstrators, like their predecessors, were going to present a petition to the Government.

The Police and the Military armed to the teeth, reminiscent of totalitarian regimes, and backed with riot control vehicles and horsemen threw teargas into the midst of thousands of demonstrators protesting against the passage of the Representation of the People (Amendment) Bill (ROPAB) by Parliament.

The demonstrators had gathered at the Cenotaph, waiting for their Leaders, who had gone to present their petition to the Government. A group of zealous youth set fire to used car tyres at the intersections and started to sing and dance around the fire. The Police moved in with their water cannon to put off the fire and this infuriated the youth, who started throwing stones at the Police. The Police responded by throwing teargas canisters into the midst of the demonstrators. They then charged on them, beating them with their batons.

Cephas Colle from Kpone, who was seen limping, told the GNA that he fell down and sprained his ankle, when the Police charged on them. A demonstrator told the GNA that the youth were just enacting the Fire Festivals celebrated in the Northern parts of the country, which the Police misunderstood.

"Fire Festival is celebrated as a sign of appreciation to God for His blessings. We were just thanking God after a successful peaceful demonstration that lasted several hours but the Police misunderstood us," he said.

"The Police action would not deter us from marching weekly until the Government listens to us. We will hit the road every Tuesday to register our abhorrence to the bill," he said.

The Police refused to speak to newsmen. When GNA attempted to talk to one of their Commanders he said: "We would not speak to any newsman now. We have everything that happened on tape. It would be examined and the Police Administration would issue a press statement in due course. The second demonstration against the Representation of the People (Amendment) Bill (ROPAB) got underway in Accra on Tuesday with hundreds of marchers clad in red and bearing placards condemning the Bill. The demonstrators that include several leading members of opposition parties began their march, organised by Concerned Ghanaians, amidst drumming and singing from the Kwame Nkrumah Circle to the Osu Castle to present a petition to President John Agyekum Kufuor. Some of their placards read: "TUC says no to ROPAB"; "ROPAB is NPP's weapon for destruction"; "Nananom should kick against ROPAB"; "God forbid the passage of ROPAB".

About 1,000 Police Officers under the command of Greater Accra Police Commander, Assistant Commissioner of Police (ACP) Douglas Akrofi Asiedu were out in the streets to maintain law and order. Police Officers, some in riot gear were positioned at intersections along the route of the march which went through the Kwame Nkrumah Avenue to the Farisco Traffic Lights and then turned left towards the Trades Union Congress and then through the Ministries to the Christianburg Crossroads.

Several leading members of the opposition parties, including Former Vice President Professor John Evans Atta Mills; Chairman of the EGLE Party, Mr Danny Ofori-Atta; the Acting Chairman of the People's National Convention, Alhaji Ahmed Ramadan; Dr David Pessey, a leading member of the National Reform Party and MPs of the opposition parties were among those who started the demonstration.

The Minority in Parliament has boycotted parliamentary attendance over the issue.