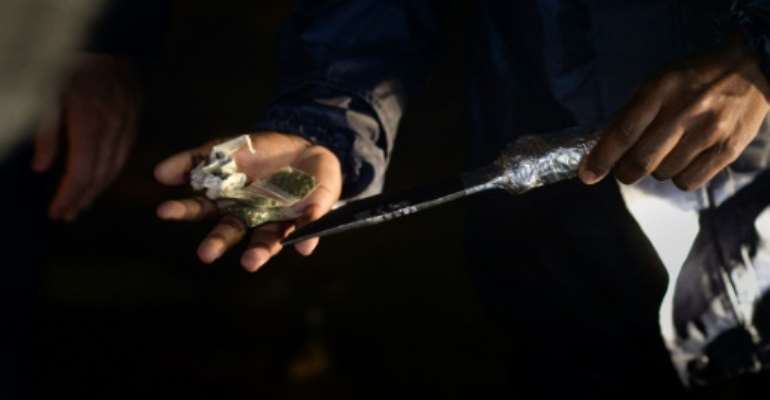 Knife and drugs: The haul made by a patrol in Bonteheuwel, a crime-ridden district of Cape Town. By RODGER BOSCH (AFP)

Fifty-eight people were killed each day on average in South Africa last year, police said Thursday, urging the help of experts to understand why so many murders are committed by friends and relatives.

"A very high number of people are murdered by the people that they know," police minister Bheki Cele told lawmakers in Cape Town, adding that this made it difficult "to police such cases".

He said the government had called on the help of sociologists and psychologists to understand why so many people were killed by family members, neighbours and lovers.

Most of the murders were carried out with guns, knives and other sharp instruments.

Another concerning figure showed that 1014 of the victims were children, 29 more than during the previous 12 months.

"Some of these murders of children are committed by other children," Major General Norman Sekhukhune said, adding that around 736 of those were committed by children under the age of 18.

Presenting the figures to parliament, Sekhukhune said alcohol and drugs were major influencers.

More than half of the murders were committed over weekends between 9 pm and 3 am, he added.

South Africa's murder rate has climbed steadily over the past six years.

Contact crimes, including rape, assault and robbery, were highest in the Gauteng, Western Cape and KwaZulu Natal provinces -- the economic hubs of Africa's most industrialised nation.

In a country plagued by femicide, 41,583 incidents of rape were reported to the police, while 7,437 people said they had suffered sexual assault.

The number sexual assault cases against children rose by 899.

Last week, President Cyril Ramaphosa vowed to crack down on the rape and murder of women, unveiling a raft of plans to tighten laws.

Women across South Africa have been protesting against the "war on their bodies", calling for the government to do more to protect them.

Recent murders of university students and other women have sparked outrage in a country seen as one of the world's most dangerous places, and that often appears numb to femicide and sexual violence.

Payments Made To Customers Of Collapsed Banks, Others Must B...
2 minutes ago