Disguised Sex Slavery In The Gulf 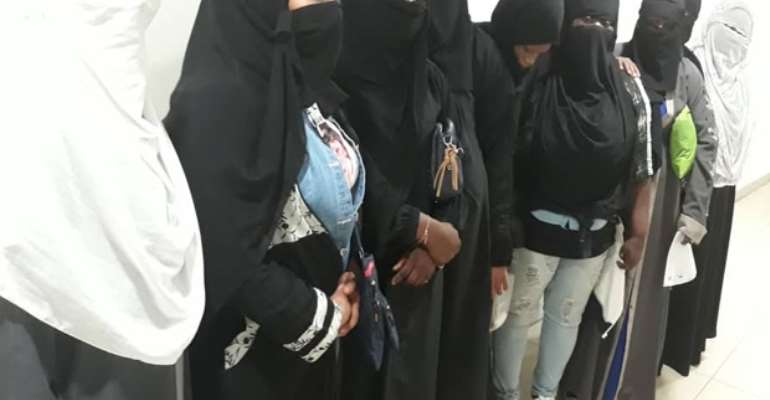 Thirty-five Ghanaian nationals, most of them women, have been deported by Saudi authorities in the past five days‒ one of the stories in this edition has pointed out.

Each of the deportees has a harrowing story to tell stories which are too familiar to many of us. One of the deportees who preferred anonymity counselled her compatriots to remain in the country and find something to do for their livelihood rather than go and serve as sex slaves in the homes of rich but uncaring Arabs.

It is not out of place for Ghanaians to travel to other parts of the world in search of greener pastures. Before they take the final decision however, they must have had sufficient briefing about the unknown land they are heading to.

Unfortunately, however, employment agents who process them for the dangerous trips do not counsel them about what to expect, their primary objective being the commission to be earned rather seek the welfare of their ignorant clients.

They end up landing in Saudi Arabia or other Gulf States, only to discover when it is too late that they took the wrong decision.

We are aware that some of the women who stay illegally in Saudi Arabia go there ostensibly to perform the Hajj but decide to stay back when they are supposed to depart for home at the end of the annual religious exercise.

They live under terrible conditions and unable to access medical attention when they fall ill because they are illegal immigrants and dread what would befall them when they are discovered.

Stories about the inhumane treated meted out to the mostly female Ghanaian illegal migrants in the Gulf States, especially Saudi Arabia, is a failure in humanity. If such treatments take migrant domestic workers by surprise, those who understand the nature of nationals of the countries under review are not.

Our missions in the Gulf States constantly attend to Ghanaian nationals in distress, as usual women.

We have learnt that many more Ghanaians are in detention in especially Saudi Arabia awaiting pre-deportation formalities. It is important that the agencies which recruit unsuspecting Ghanaian ladies to go and work in such countries are held responsible for the inappropriate consequences they suffer.

Even the seizure of the passports of the migrants by their hosts when they land tells a negative story and points at what awaits them.

Some are assaulted and as one of them said they could also be physically assaulted on trumped up charges.

Government, a few years ago, placed a ban on the recruitment of Ghanaian nationals for work in the Gulf States after receiving unpleasant reports about the treatment they suffer at the hands of their hosts. If the ban was temporary, we ask that it be made permanent because most Arabs will continue to regard us with contempt.

Personnel of the Ghana Immigration Service (GIS) at points of departure such as the KIA and the Aflao border must be equipped to deal with who are about to embark on such wild trips. We have learnt that some of the agents because of the strict enforcement at KIA use the land border at Aflao so their clients can fly from Lome.

Massive education about the negative repercussions of such trips should be embarked upon through churches, mosques and chiefs. This should productively support the enforcement efforts of personnel of the GIS.