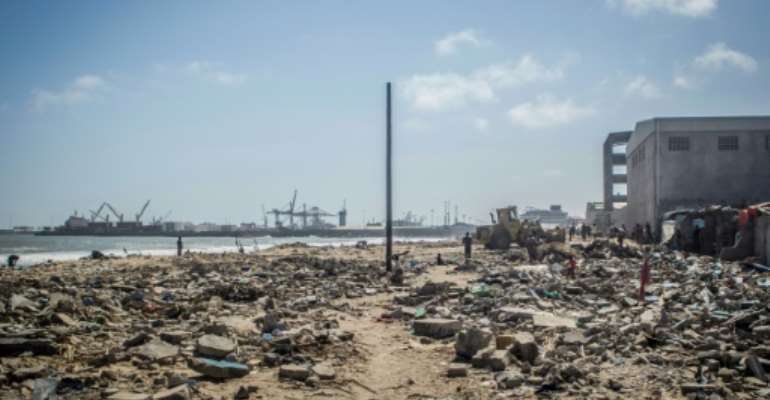 Locals said about 120 homes were bulldozed in Xwlacodji. By Yanick FOLLY (AFP)

The people watched in horror as the bulldozers moved in.

Soon their meagre dwellings were reduced to rubble, becoming homes only to stray dogs that nosed through their belongings.

The demolition of Xwlacodji, a district in Benin's economic capital Cotonou, was carried out in the name of urban development, a keystone issue for President Patrice Talon.

But local people say their homes were swept away in a maelstrom of indifference, leaving them without a roof over their heads -- a calamity that commentators say raises stark questions about Talon's signature policy.

Xwlacodji is traditionally a fishing district where people settled generations ago, but never acquired legal title to the land.

In recent years, it had gradually acquired a bad reputation. Parts of it had become "ghettos", where "drug smokers and Cotonou's dangerous people" would gather, Anani Agboessi, a community leader, told AFP.

He said he asked authorities for help to clean up the district. But the plan did not go as intended.

Residents often return to their old neighbourhoods to rebuild their homes. By Yanick FOLLY (AFP)

"Once the ghettos were razed, they turned the bulldozers on us and began to destroy homes," Agboessi said, adding that the locals could only watch "helplessly".

About 120 homes were bulldozed, according to locals. And now many residents are sleeping outside, on the edge of the Atlantic.

Kokou Mathieu Folly is one of them. The 47-year-old fisherman struggled to hold back tears after he lost nearly everything.

He sat on a small wall -- all that remains of his shower.

"With my five children, we are sleeping in a school at the moment, exposed to the elements, waiting for our situation to improve." he said.

Colette Gnacadja, a local government representative of Xwlacodji, is angry at the government.

"They fooled us, I attended all the meetings, there was never any question about touching the houses."

Like many locals, she is still in shock. Her father was once a homeowner but is now homeless.

"They say that the land belongs to the first occupants, why do we bother so much when our ancestors have settled here?" she asks.

In 2012, the former government began evicting people from the area.

President Patrice Talon has has wanted to transform urban and housing development across the country. By Yanick FOLLY (AFP)

"We were told back then that there would be buildings and that we would be relocated elsewhere," says Abla Yaovi, 65, one of the oldest members of the community, pointing out the piles of bricks and iron bars.

Yaovi makes money by selling fish. She is a widow with nine children who depend on her.

In 2012, she lost her brick house, a property she had inherited from her husband. It was rebuilt into a shack with "precarious materials", which she says was due to "the generosity of the district's inhabitants".

Today, she sleeps under the stars.

"People have been left helpless on the beach," said Moise Awonlonsou, a representative of the group.

The Xwla people have lived in the neighbourhood for more than 100 years. By Yanick FOLLY (AFP)

"This is not the best way to develop a neighbourhood," he says, adding that the locals should be involved in finding solutions for better urban planning.

Since his election in April 2016, Talon -- a hard-nosed, successful businessman -- has vowed to transform urban and housing development across the country.

But critics say that oversight of how these plans are executed is lacking, and the key issue of relocation is often neglected.

Talon is also under fire for a crackdown that has driven many of his political rivals into exile, leaving the country bereft of a credible opposition.

Without redevelopment plans, residents whose illegal homes have been bulldozed often return to rebuild in their old neighbourhoods -- as was seen in Xwlacodji after the 2012 evictions.

The recent demolition and evictions are "dangerous for the social balance" in Cotonou, said urban planner and professor at the University of Geneva, Armelle Choplin, who has worked in Xwlacodji.

Choplin said that the Xwla people, who gave their name to the neighbourhood, have lived in the district for more than a century and were among the first inhabitants of Cotonou, which now has a population of around 1.2 million.

"It's a part of the history and the identity of Cotonou that we are destroying," she said.

Ejura probe: Ministerial Committee presents its report to In...
6 minutes ago