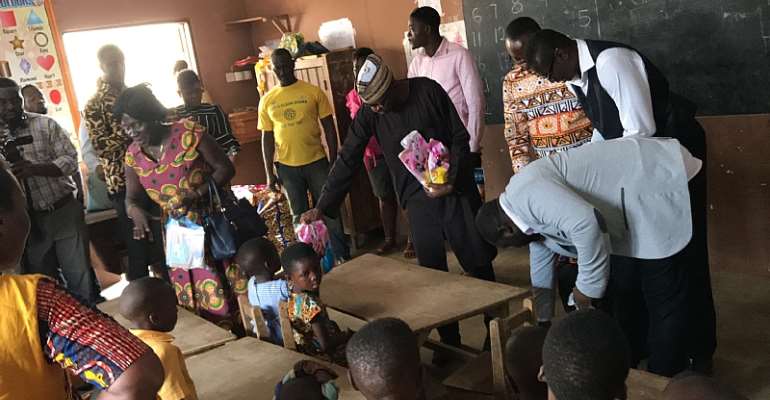 The Municipal Chief Executive (MCE) of the Ayawaso North Municipal Assembly (ANMA), Hon. Aminu Zakari, on Tuesday visited some cluster of schools in the municipality to mark ‘My First Day at School’.

The visit which was aimed at interrelating and meeting new pupils who had gained access to basic school also created an opportunity to boost the confidence of the children as well as present some stationery as part of efforts to help sustain their interest in school.

Speaking to the media, Hon Aminu said “This is a very important occasion. It is an annual ritual that Members of the Executives makes sure that they visit schools to welcome the new entrance.”

He encouraged the pupils to debunk the myth of school being a punishment.

The MCE was accompanied by the new Director of Education of the Municipality, Harry Evans Arthur and some officials from the Assembly.

As part of ANMA’s vision of maintaining teaching and learning, the MCE distributed pencils, erasers, pack of crayon, exercise books and snacks to each pupil.

He said, “These gifts will encourage them to learn and stay in school.”

Hon Aminu pointed out that over 200 Kindergartens and Basic 1 pupils have been admitted in the three schools visited adding it was a national policy for government officials to visit kids on their first day at the various schools in the Municipality.

He assured the pupils and teachers of the Municipal Assembly’s assistance.

“I am here this morning to see how you are faring and to give out gifts. Next time when I come here, I will give out chocolates but that will be for pupils who will come to school,” he said.

The Director of Education, Harry Evans Arthur reiterates his commitment to ensuring the pupils benefit from quality education and urged them to take their education seriously.

The Heads of the various schools visited thanked the MCE and his team for the kind gesture.