Will Tunisia continue to democratise? 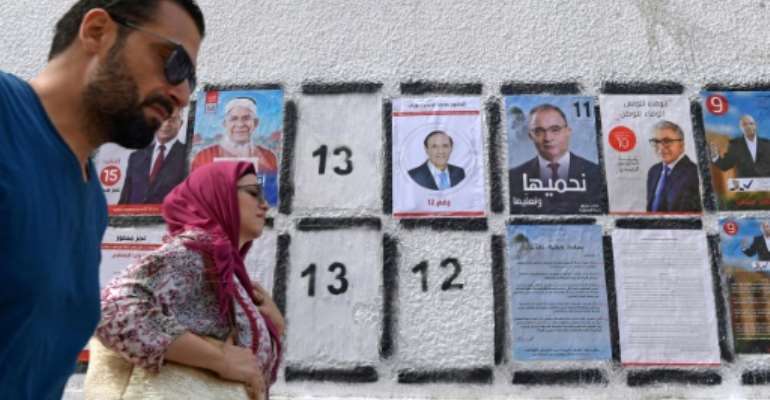 Tunisia has been praised for its democratic progress since the Arab Spring, but the process faces challenges. By FETHI BELAID (AFP/File)

Despite priding itself on being the sole country to emerge from the Arab Spring uprisings as a functioning democracy, Tunisia faces challenges on its new political path.

The cradle of the autocrat-ousting movements that swept the region nine years ago, the North African country has been praised for its democratic progress since the toppling of dictator Zine El Abidine Ben Ali.

But it has faced obstacles in the form of an economic crisis and the resurgence of the former regime elite.

The approach of presidential elections on September 15 has once again raised the question of whether Tunisia's nascent democracy will last.

Will the elections be fair?

Tunisian and international observers have dismissed the prospect of systematic fraud in the country's second free presidential election by universal suffrage.

Some breaches have been noted, just as they were in the 2014 presidential election, observers said those shortfalls did not impact the result last time around.

However, many have expressed concern over the timing of the arrest of heavyweight candidate Nabil Karoui.

One elected official, who chose to remain anonymous, said that if the media mogul is genuinely being prosecuted for money laundering, his arrest ten days before the campaign recalls a "bad reflex of old-style politics".

Karoui's supporters accused prime minister and rival candidate Youssef Chahed of orchestrating his arrest, having failed to sideline Karoui via a change in the electoral code.

"It's proof that there is real freedom to run, and genuine competition," he said.

Isabelle Werenfels, a researcher at the German Institute for International and Security Affairs (SWP), called the vote a democratic "test" because "it may require accepting the victory of a polarising candidate", such as Karoui.

Are all the candidates democrats?

Some candidates -- like lawyer Abir Moussi, champion of Ben Ali's Democratic Constitutional Rally (RCD) party -- say that freedoms gained since the dictator's ouster in 2011 mean little in the face of escalating economic difficulties.

Some of the 26 hopefuls have also called for the president's powers to be beefed up, despite the risk this entails in a country led for decades by unchecked strongmen.

These leanings have been reinforced by the inversion of the electoral calendar after the July death of president Beji Caid Essebsi, which forced the presidential vote forward by two months.

Legislative elections are scheduled for October 6 and will now be held in the wake of the first round of the presidential poll.

"The overfocus on the president makes the whole switch de facto, undermining the parliament," which is supposed to come first, Werenfels said.

"It's a democracy where the democrats have little electoral weight, as is often the case during transitions," he said.

Could Tunisia return to dictatorship?

But despite fatigue at political quarrels and the economic crisis, columnist Ziyed Krichen insisted there would be "no going back... No dictator can assert control in the country."

Freedom of speech was a key gain of the Arab Spring movement in Tunisia, although abuses are still regularly reported.

In the latest Reporters Without Borders press freedom ranking, Tunisia, 72nd, was at the top of the Middle East and North Africa region, ahead of Lebanon and Israel.

And almost a decade since the revolution, a generation of Tunisians can't imagine life without democracy.

Among them are members of a very active civil society, which has upped the fight against impunity over torture cases.

But recommendations published in early 2019 by the Truth and Dignity Commission, a transitional body created in 2014 to tackle crimes under the dictatorship, have not been carried out.

The government is meant to propose a plan of action by the end of the year, in particular regarding reforms to the police and judiciary, key mechanisms of Ben Ali's rule.

But some political officials have been reticent or even openly opposed the commission.

SWP, the German think tank, said in March that serious obstacles still stand in the way of ensuring that gains in Tunisia's political life are made the norm in other domains, namely the economy and judiciary.

"The danger is that Tunisia becomes a hybrid regime in which democratic elements and processes are muddled with authoritarian reflexes and sometimes anti-democratic measures," it said in a report.

"Reforming the state apparatus and highly corrupt economic structures is imperative to ensure sustainable social and political stability in Tunisia."