S.Sudan rivals to keep to deadline for unity government 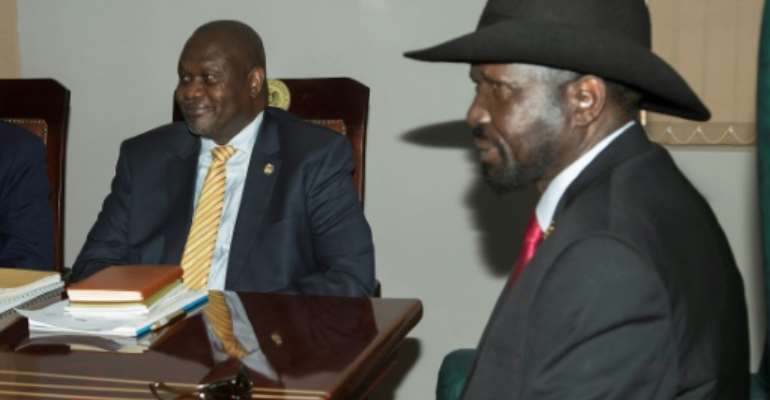 South Sudan's President Salva Kiir and rebel leader Riek Machar on Wednesday vowed to stick to a November deadline for creating a long-delayed power-sharing government, during a rare meeting in the capital Juba.

Machar wrapped up a three-day visit to South Sudan -- his first in a year from exile in Khartoum -- where he and Kiir tried to salvage a peace agreement that has stalled on several key fronts.

"The parties agreed to establish the government in time. When I said in time it means on the 12th of November," government spokesman Michael Makuei told journalists after the meeting.

Observers say a political deal between the historical rivals is the only way to move forward with the 2018 peace deal that has become stuck on key issues of security, and internal state boundaries.

The two men, whose enmity plunged the country into war in 2013 only two years after a hard-won independence that has been marked by ethnic brutality and humanitarian suffering, agreed to hold further meetings soon.

"I told you earlier on that talks between us are going well. And we will reach a deal soon," Kiir said after the meeting, exchanging handshakes with Machar.

Machar is seeking assurances about his personal security before permanently returning to Juba, which he fled under a hail of gunfire when a previous peace deal collapsed in July 2016.

He returned in October 2018 for less than a day to celebrate the signing of the peace deal.

"Juba is home and I have come back to Juba, even if I go away (again) for some time... we have made an important progress," in our discussions, Machar said.

His deputy Henry Odwar told journalists the men had also discussed efforts to mediate with rebel groups not party to the peace agreement, who have continued fighting in pockets of the country.

A ceasefire is generally considered to have held -- outside of the Central Equatoria region where these holdouts have been fighting -- however the International Committee of the Red Cross (ICRC) said Wednesday violence remained pervasive.

The fighting in South Sudan has left about 380,000 people dead and forced more than four million South Sudanese -- almost a third of the population -- to flee their homes.

The World Food Programme said Wednesday there was a slight improvement in food security as a result of the peace deal, however "more than half the population of South Sudan - some 6.35 million people - do not know where their next meal will come from."