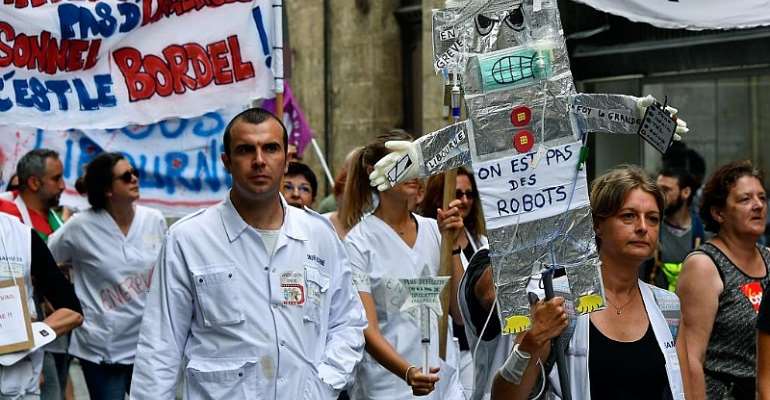 Health workers on hospital emergency wards continue their industrial action despite Monday's promise of massive investment in France's A&E services over the next 3 years.

After almost 6 months of protest, France's minister of health Agnès Buzyn offered hospital staff an olive branch to the tune of three-quarters of a billion euro this week to "rebuild" the country's emergency services from now and 2022.

Since the spring, employees at 250 A&E outlets have downed tools over work conditions with many strikers unhappy with the minister's offer as it fails to directly address the concerns of emergency staff.

According to Buzyn's plan, €750million will be appropriated from existing funds for the creation of a new "health care access" service to balance the workload of staff dealing with emergency calls, direct access to emerncy wards for elderly patients and improved management of hospital bed availability.

Not enough, not realistic
The ministers promise has been viewed by some as "a positive step forward", but for Hugo Huon, president of the Inter-Urgence collective leading the industrial action, nothing has been put in place for workers. The plan is "far removed from what was expected".

Meeting in the Paris suburb of Saint-Denis on Tuesday, members of the collective discussed their next step, and debated a "calendar of action" regarding future protests. Also present at yesterday's assembly was the president of the Association of Emergency Doctors in France, Patrick Pelloux, who said his organisation would announce its plans on whether to join the strike by this Thursday.

Saying that he was "let down" by the minister's offer, Pelloux added that it was a "missed opportunity" by the government who have failed to address the issue of salaries and appreciate the work of paramedics across the country.

Also on Tuesday, the Force Ouvrière union declared that it would join the strike saying Buzyn's promise "doesn't deal with the reality of the situation on the ground."

Less critical of the offer, the CFDT union called the move significant, but "lacking many things regarding the recognition of the work involved" in the sector.

The industrial action continues amid calls for direct negotiations with the French government.