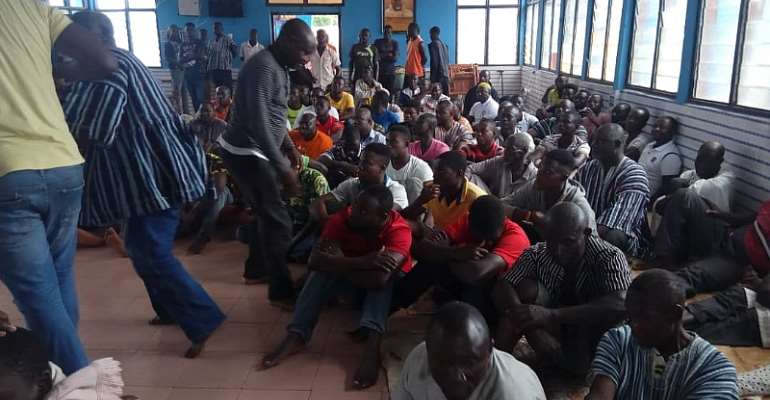 A section of the youth in the newly created Savannah Region under the auspices of Damongo Youth Parliament is protesting the decision by government to situate critical regional departments outside the Regional Capital.

There was uneasy calm after news broke that the Savannah Regional Coordinating Council intends to site three of the four regional departments secured for the region outside the Regional Capital, Damongo.

This distribution, however, is not going down well with the youth, since, they hold the conviction that;it will increase administrative cost, create room for poor coordination among major departments in the region and promote inefficiency in central administration.

In a protest match by Damongo Youth Parliament, the youth at the Jakpa Palace registered their displeasure before Yagbonwura and his elders, demanding a reversal of the decision.

Mr.Ananpansah B Abraham,a leader in the parliament for instance argues in an interview on PAD FM that,all regional departments with direct links to the central administration or bureaucracy of the region must be located in the regional capital for easy administration, adding that, "the RCC and its departments are to coordinate development in the region and must not be dispersed".

The Yagbonwura who spoke through his chief linguist warmly received the youth, assuring that their voices were going to count.

He said they also heard the news through a local radio station, PAD FM.

A meeting between the youth, the Overlord and the Regional Minister was convened where His Royal Majesty echoed the voices of the youth.

He said proverbially that, you cannot give a bull to a landlord as a gift and dictate to him how to distribute the meat after killing it.

In effect, the blueprint being used to distribute the regional departments in a bid to develop the infant Savannah Region does not settle down well with the masses and the Traditional Council.

The Regional Minister, hon. Salifu Adam Braimah in a response, which was further carried in a press briefing said he was only implementing the vision of the president for the six new regions.

He disclosed that unlike the older regions, it was the intention of the government to decentralise development and government installments in the new regions to the other districts. This paradigm shift which was announced before the creation of the region he reiterated, was to promote even and equitable distribution of the regional cake.

He said now that the matter is before the chief petitioner, His Royal Majesty Yagbonwura Tutumba Boresa 1, useful suggestions can be made to the president on the road map for Savannah Region.

Yagbonwura has thus disclosed that, since he does not rule the kingdom alone, a meeting of all paramount chiefs in the Traditional Area will be held on Thursday, August 12, 2019. A decision on the matter will be taken therefrom and conveyed to the president through a delegation.

The youth group satisfied with proceedings thus far is scheduled to announce its next line of action very soon.