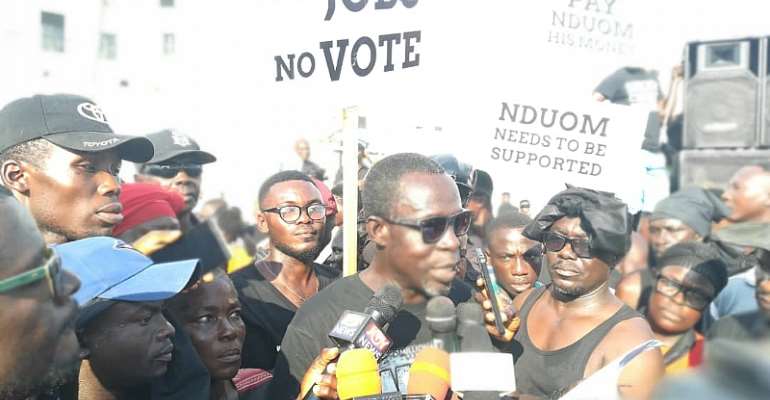 PETITION PRESENTED TO THE PRESIDENT, NANA ADDO DANKWA AKUFO-ADDO, THROUGH THE MUNICIPAL CHIEF EXECUTIVE, NANA APPIAH KORANG BY THE CONCERNED CITIZENS OF ELMINA, IN THE MATTER OF DR. PAPA KWESI NDUOM AND HIS BUSINESSES ON 10TH SEPTEMBER, 2019.

We, the Concerned Citizens of Elmina have observed with utmost dismay the deliberate plan by the Bank of Ghana to destroy the reputation and businesses of our beloved and illustrious industrialist, Dr. Papa Kwesi Nduom. Our son, affectionately called Edwumawura by many Ghanaians is under attack from some agents of the state to destroy his business empire for political and personal reasons. We wish to bring this serious matter to the attention of the President, through his able Municipal Chief Executive, to intervene as the father of the nation, in this matter of attacking a Ghanaian businessman.

1. In 1874, the Colonial Administration attacked a respectable and responsible entrepreneur from Elmina. We have not had another industrial icon in this town. The closest we have had is Dr. Papa Kwesi Nduom. Regrettably, the same vindictiveness, hatred, backbiting, and destructive tendencies, which the colonial administration metered out to Mpili Mensa is being repeated by our own Self-government to Dr Nduom and his businesses after 150years.

2. We, the people have not seen any prominent indigene of the land with such great entrepreneurial skills, talent and gift like Dr. Papa Kwesi Nduom. It is for this reason that we believe such people are rare, they are gifts from God and they must be protected and supported. If we kill them deliberately, then we are inviting curses upon ourselves and our land, in respect of unemployment, poverty, armed robbery, diseases, squalor, misery and perpetual under-development.

3. Our Elders have a proverb which says that “Any sculptor may be able to work with good wood. But it would take a great sculptor to make something out of crooked and unworkable wood”. We owe it a duty to ensure that this mighty tree in Elmina is protected and preserved.

4. Dr. Nduom has brought the people of Elmina and KEEA, a number of companies in the area of manufacturing, industrial printing, electronic assembling, quarry and concrete products, Basic and Tertiary education, Sports and Entertainment, Hotel and Hospitality. He has given thousands of jobs to people, supported many businesses to grow, provided sports and entertainment after hard work. He has brought work and happiness back to Elmina.

5. The Bank of Ghana (BoG) took away the license of GN Bank because they claim the bank cannot pay its customers. We know that if the government pays the GHc2.2.billion it owes Dr. Nduom, he would be in a position to pay all his customers. The sea defence project in Axim (Lower Dixcove), which was commissioned by the President early this year, is among the many projects GN has funded and executed which is yet to be paid. If government owes Nduom all these monies, why do some government officials turn around and say he can’t pay his customers?

6. We are aware government, through the Ministry of Finance has supported five local Banks of which three are private Banks. They were supported with tax payers money to enable them meet the new GHC400 recapitalization requirement. We pray with the government to extend the same kind of support to GN.

Denying GN of such support to save the Bank, and more surprisingly, monies owed by government to GN being denied him under the pretext of validating the debt for the past three years is very disappointing.

7. The Minister of Finance has refused to pay monies that the government of Ghana owes Dr. Papa Kwesi Nduom to the tune of Ghc2.2billion. The government has not denied this fact but they say they are looking into the claim by Groupe Nduom. Now, if the Honourable Minister of Finance, Mr. Ken Ofori-Atta has not finished looking into the debt claim by GN, why should Dr. Nduom pay for the inefficiencies of the Finance Minister? We believe this validation process is a deliberate act on the part of the Honourable Finance Minister to deny Dr. Nduom the cash needed to maintain his business and the bank. We implore on the government to expedite action on this much talked about validation exercise to enable GN meet its obligations.

8. Many people are likely to base their decisions in respect of the 2020 Presidential and Parliamentary elections on the outcome of this issue. We believe the government could have resolved this matter in another way. Closing down Nduom’s business empire for whatever reasons, is not the most effective application of political power and that decision is definitely not in the interest of the people of Ghana.

9. We pray and appeal to His Excellency, Nana Akufo-Addo who has promised to create jobs for Ghanaians to look into this matter and fast-track the validation of the Ghc2.2billion debt, so that the Honourable Finance Minister will be ordered to pay Dr. Nduom all his money and give the banking license back to him. About 4,000 direct employees of GN Bank are going to lose their jobs and suffer hardships with their families and children.

10. We believe that the President will cause a review of the decisions of his appointees who have decided to kill the businesses of Edwumawura to settle personal scores.

11. We recognize the One District One Factory Policy of the government; we suggest that, industrialist such as Dr Nduom, should be seen as partners in the creation of industries across Ghana. Local business owners create opportunities and they need to be supported!