Amidu is our witness: Didn’t Mills set up a Committee to investigate Mahama? 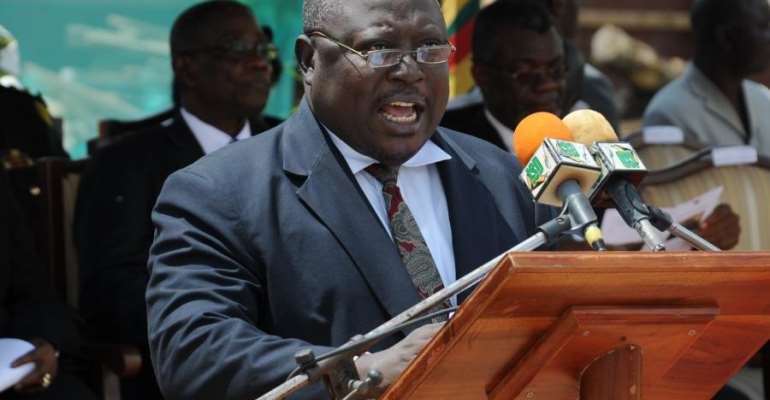 It is quite strange that the vast majority of the NDC Communicators are denying any knowledge of the late Mills setting up a Committee to investigate the then vice president, John Dramani Mahama over the dubious Brazilian aircrafts deal (see: martinamidu.com).

The overarching question then is: if the ubiquitous frog comes out of water to announce the untimely demise of mighty crocodile, who are we to refute such a chilling pronouncement?

Similarly, some of us could not have doubted the then Attorney General under Mills/Mahama administration and the current Special Prosecutor, Mr Martin Amidu, when he audaciously came out and informed the good people of Ghana that the late Mills suspected a foul play in the Brazilian aircrafts deal which was handled by his vice president, Mahama, and therefore found it somewhat necessary to set up a committee to probe into the dubious deal.

Apparently, we have heard the NDC faithful time and time again contending somewhat vehemently that the late Mills did not constitute any such Committee to look into the cloudy deal spearheaded by Mahama.

What the opposition NDC Communicators are failing to admit is that, there are more bribery and corruption scandals hanging on the neck of Ex-President Mahama than any other president in the history of Ghanaian politics.

Somewhere last year, we read that four valiant Ghanaians had petitioned the Special Prosecutor Martin Amidu to probe into the alleged E.O. Group’s $13 million corporate social responsibility fund towards the development of the Western Region which the petitioners claimed to have been diverted by Ex-President Mahama (See: ‘Mahama diverted $13m E.O. Group money; probe him – Four citizens petition Amidu’-todaygh.com/ghanaweb.com, 18/06/2018).

Credible sources, however, have it that the Special Prosecutor has started the investigations into the alleged scandal being linked to the former president.

It is also worth reminding the NDC Communicators that somewhere in October 2010, the British media brought up sensational reports about how the then Vice President John Dramani Mahama was lobbied by a British Cabinet Minister to get a reprieve for the ban imposed on Armajaro Holdings, one of the cocoa buying companies who were found guilty for smuggling the commodity out of Ghana.

Armajaro Company was banned together with a few other companies when the award winning investigative journalist, Anas Aremeyaw Anas exposed the smuggling of bags of cocoa into neighbouring Cote d’Ivoire.

Shockingly, however, the British media reported that subsequent to the meeting between the then Vice President John Dramani Mahama and the British Cabinet Minister, Armajaro Company was given a needless reprieve and then started its operations.

If you may remember, during his State of the Nation Address on 19th February 2009, the late President Mills informed the Parliament that his government was looking into the decision to acquire two executive Presidential jets.

However, the late President Mills was indecisive over the acquisition of the aircrafts and thus observed: "Ghana simply cannot afford the expenditure at this time and we certainly do not need two Presidential Jets" (thestatesmanonline.com, 16/06/2016).

Astonishingly, however, whilst the late Mills was joyfully delivering his euphonious state of the nation address, the Vice President John Mahama, who also happened to be the chairman of the Armed Forces Council, was blissfully entertaining delegations from Brazil, and busily negotiating the acquisition of five jets, including the most expensive hangar without the knowledge of the late President Mills.

Unsurprisingly, therefore, the late President Mills became suspicious of the whole deal and decided to put a committee together to review the deal, according to Mr Martin Amidu.

Disappointingly, however, according to Mr Amidu, the late Mills could not put his foot down and woefully allowed the committee to somehow turn a blind eye to his directives.

To be quite honest, there are serious questions here that discerning Ghanaians must probe: is President Mahama indeed a scattergood or corrupt?

And more so was the late Mills really unhappy about the conduct of his then vice president, John Dramani Mahama?

Moreover, did the Committee refuse to carry out President Mills directives?

Please NDC Communicators, pay attention while we try to pin the ostensible straddled jigsaw together.

It would be recalled that a few years ago, Mr Amidu came out and told the whole nation that in July 2011, there was a hue and cry about the prices for the acquisition of five (5) aircrafts for the Ghana Armed Forces.

Mr Amidu asserted: “even though on 26th July 2011 the late Prof. Mills attempted to defend the purchase of the five aircrafts, he became convinced of the necessity to set up a committee to investigate those purchases”.

The overarching question here is: did the late Mills have a glint of suspicion on his mind and felt Mahama was trying to rip off the nation?

Well, reflective thinkers can conclude that the late Mills was not happy with the deal.

And, if that was not the case, why would he set up a committee to investigate Mahama, the architect of the whole deal?

Mr Amidu’s chilling revelation continues: “a Committee to Investigate the Processes of the Acquisition of Five Aircrafts (5) including Embraer 190 Aircraft and hanger for the Ghana Armed Forces consisting of Mr. William Aboah, Mr. George Amoah, and Brig. Gen. Allotey (Rtd) former Judge Advocate-General was put together”.

Based on the preceding revelation, I have no doubts whatsoever in my mind that Mr Amidu’s story is credible.

First, Mr Amidu went ahead and named the members of the committee set up by the late President Mills.

Secondly, the fact that none of the committee members has come out to repudiate or disassociate themselves from the allegations gives credence to Mr Amidu’s averment.

The big question then is: why have they kept quiet? Your guess is as good as mine.

“But the very fact that the late President Mills even contemplated this committee meant that he was uncomfortable with and suspicious of the alleged inflated prices of the aircrafts”.

There we go. Amazing revelations!

Did pressure groups really interfere with the work of a committee set up by President of the nation? Were the pressure groups from the ruling party? If so, did they have vested interests in the purchasing of the aircrafts or what?

Anyway, whatever their reasons may be, their actions were unlawful, and can best be seen as an attempt to pervert the cause of justice.

Are we really serious as a nation at all? How on earth can pressure groups selfishly interfere in a legitimate committee’s work?

You see, our problem as a nation is, we have sycophants, corrupt, incompetent and ‘nodding yes men and women’ who are only interested in amassing wealth at the expense of the masses. So they would go to every extent to achieve such objective.

Unquestionably, the Late President Mills put his trust in Mahama, but if we are to believe Mr. Amidu’s account of the corruption saga, we can then draw an adverse inference that Mahama betrayed the trust the late Mills reposed in him. It therefore explains why the late President Mills set up a committee to investigate him.

In fact, there are serious issues here that need to be considered by the voting public.