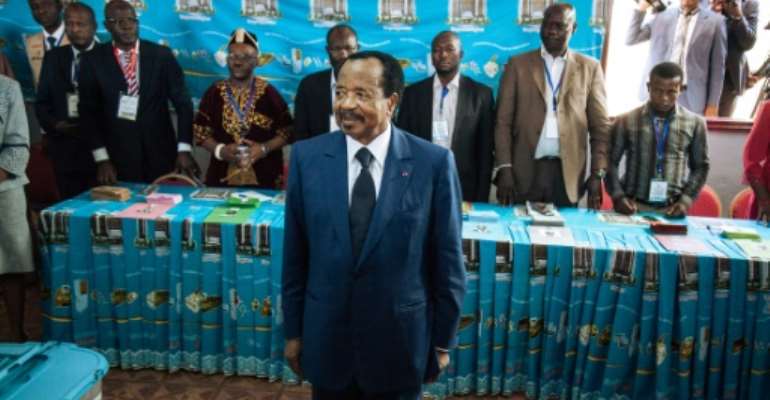 Cameroon's President Paul Biya, pictured in 2018, reiterated his offer of a "pardon" to any separatists who voluntarily lay down their arms. By ALEXIS HUGUET (AFP/File)

Cameroon President Paul Biya, in a rare public appearance Tuesday, said he intends to hold a major "national dialogue" in a bid to put an end to the conflict between security forces and armed separatists from the anglophone minority in the west.

Over the past two years Cameroon has been mired in the ethnic unrest which has left more than 2,000 people dead as English-speaking separatists demand independence in two western regions. More than 500,000 people have been forced from their homes as a result according to the Human Rights Watch group.

"I have decided to convene, from the end of this month, a major national dialogue to allow us... to examine the ways and means to respond to the deeply-held aspirations of the populations in the Northwest and Southwest, but also in all the other component parts of our great nation," the 86-year-old president said in an address to the nation aired on national television and radio.

Biya, who has been in power for 37 years, reiterated his offer of a "pardon" to any separatists who voluntarily lay down their arms, while vowing that those who refuse to do so will face "the full force of the law" as well as the country's security and defence forces.

English speakers -- who make up roughly one fifth of Cameroon's 24 million inhabitants -- live in regions that were formerly a British colony but voted to join French-speaking Cameroon after the end of colonial rule six decades ago.