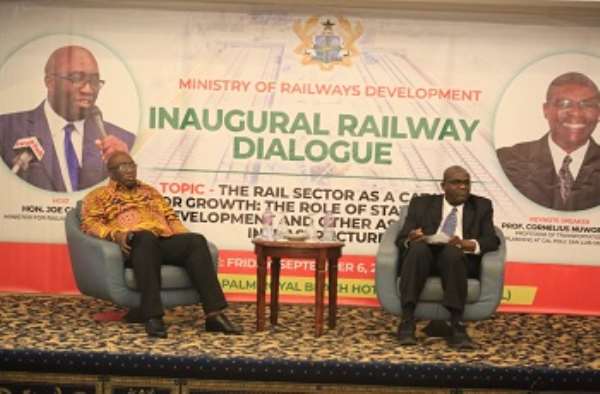 The Ministry of Railways Development has officially launched a dialogue series to engage the public on the development of the sector.

The maiden edition of the series was held at the La Palm Royal Beach Hotel on Friday, 6th of September, 2019 to create a wider platform for the railway ministry and its stakeholders and discuss issues pertaining to the development of the railway sector.

Speaking on the theme for the debut dialogue 'The rail sector as a catalyst for growth; the role of station area development and other associated infrastructure,’ the minister established that President Akufo-Addo has prioritised the railway sector to serve as a catalyst for the industrialization and socio-economic development of Ghana.

In his keynote address, the main speaker of the dialogue, Prof Cornelius Nuworsoo, spoke on some developmental projects other countries such as Japan, Washington DC among others had adopted to develop their railway sector.

He was of the belief that Ghana could also attain that level if a few pointers were taken into consideration.

“A well planned rail network and station area development can result in a positive impact on the community including consolidation of economic activity and overall improvement of economic health”, Prof Nuworsoo stated.

“In Ghana, the funding of national rail network is only the beginning” he said.

He emphasized that there was more to do to harness the railway sector's potential for a robust economic development.

Speaking on the history and objectives of the ministry, Joe Ghartey stated that, the ministry of railways development was established in 2017 and tasked with the responsibility of ensuring the rapid development of the modern railway network.

The ministry is also mandated to ensure the development and formulation of policies, plans and programs to guide the development of the sector for the movement of passengers and goods, facilitate trade, industrial development.

Since its inception in 2017, the ministry together with the sector agencies; the Ghana railway development authority and the Ghana railway company limited have taken step to re-develop and revamp the railway sector as per its mandate.

Having a modern railway network according to the minister is one of the legacies the president hopes to leave for his successor after his tenure.

Present at the dialogue was Andy Appiah-Kubi, the deputy minister for railways development and Adelaide Benneh, board chair of the Ghana Railway Authority.