Against Ebola, food is a key tool in DRC, says WFP 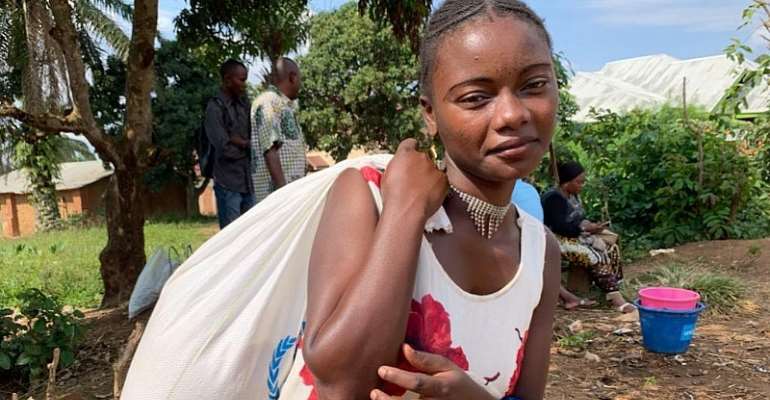 In the eastern Democratic Republic of Congo, the fight continues to try and contain the deadly Ebola virus. Healthcare workers fighting to prevent contamination and save the afflicted have the new vaccine on their side, as well as an obvious, if overlooked way to help: food.

“Thirty million people in DRC are food insecure, they don't have enough food to survive, which means that when people are sick, and their immune system is already very weak, and so it will be very hard for them to recover,” said Deborah Nguyen, the southern Africa region spokesperson for the World Food Program, who was in the eastern DRC, monitoring the Ebola-linked programs.

WFP feeds Ebola survivors for up to a year after they are cured in an effort to help them recover, said Nguyen.

“When you get Ebola you lose a lot of weight -- some people lose up to 10 kilos. Nutrition is crucial to ensure that these people can recover faster and get back to normal life,” she said.

The Democratic Republic of Congo is considered one of the most food insecure countries in world, according to WFP, second only to Yemen.

The eastern DRC was first hit with Ebola, the deadly hemorrhagic disease, in August 2018, a complex region that has been rocked with a high level of insecurity due to interethnic and armed conflict.

The inaccessibility of the region, the broad level of mistrust people there have of the healthcare community, and the fear people have of the armed militias have contributed to an epidemic that has killed more than 2,000 people, the second-biggest Ebola epidemic since the disease was identified.

“It's very difficult in that context to operate because people get scared because of the security incidents and so they move around, and so there's a higher risk to spread the virus,” said Nguyen.

Food becomes even more valuable if organizations such as WFP can provide feeding areas where people can be checked for Ebola, but also receive sustenance at the same time.

Still major stigma for those affected by the disease

Combatting Ebola on many fronts is key to eradicating it from the North Kivu and Ituri region, but education about how the deadly hemorrhagic fever is transmitted and what/who to avoid is crucial.

“It's important to inform people so they get treatment in time, that they get vaccinated, and they understand how they can contaminate each other if they do get sick,” WFP's Nguyen told RFI.

Time is one factor in the healing process, says Nguyen, “but we've noticed that it is also difficult for them to get back to normal life because there is a lot of stigmatization in communities.”

Those who have jobs cannot necessarily go back to work in a weakened state, but she said that after speaking to families affected by Ebola, those who were employed lose their jobs because people are scared.

Nguyen met a nurse who had her own small health clinic just outside of Goma, and she had direct contact with a patient with Ebola in her clinic. People are scared of catching Ebola and refuse to use her services; meanwhile, she has 10 children to feed and just lost her livelihood.

“There are lots of health workers who were in direct contact who receive food… so they can stay home in the 3 weeks without contact,” said Nguyen, referring to the amount of time those who had direct contact with a patient could be contagious.

“We also try to involve them in the Ebola rescue by hiring them in Ebola treatment centers for example, where they can help us raise awareness as well,” she added.

Another woman, who sold smoked fish in the local market, her husband died of the disease. She caught Ebola and so did her two-year old, just one of her 12 children, said Nguyen. She survived, her daughter survived, but people in the community have avoided the whole family.

“No one wanted to approach them, even their own family, no one wanted any contact with them; they were stigmatized and very isolated,” said Nguyen.

And although mourning the death of her husband, when people realized he died of Ebola, they stole her fishnet and she lost the only means she had to work.

Her 23-year-old son told Nguyen that he does not have friends any more because people are scared of him, that he might give them the disease, and he can't find a job.

Healthcare is important, food is key, but this issue is destroying the fabric of communities.

“It's not only about getting the disease and recovering, but it's also how can we help communities get back to a normal life after this,” said Nguyen.