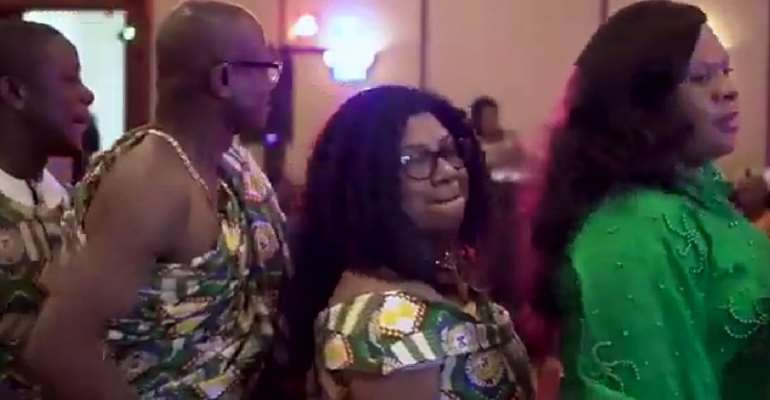 Whatever has a beginning definitely has an end. Columbus 2019 ended in Columbus on a higher note and whatever happened there had given the association gravitas to do more and everything that happened there had been embedded in the minds of members. The tactical nous of Columbus chapter president Ms. Henrietta Agyei, the executives, planning committee, and all its members were able to fulfill all the prescriptions of what a good convention was like. There was no doubt that the stock of Cobaana had suddenly soared and it had been made green with envy. It would, therefore, be a salivating prospect if the association could build on this. This also raises the bar for future host cities to go the extra mile to make it more interesting and lively and Cobaana really acknowledges this with profound gratitude. It was also an occasion for Cobaana to reaffirm that despite the division of the former B/A region into three, there shouldn't be any differences which would degenerate into disunity.

The preliminaries of the convention started on Friday morning August 30th, with a cruise on lake Erie and its islands. Kofi Adoma of KofiTV was on board to cover everything live on Facebook and YouTube and most viewers and subscribers attested to it that Kofe TV was clear ("Kreeee"). On Saturday morning all various chapters arrived at the Marriott hotel for a meeting to discuss the way forward and reflect on where they fell short since the past year. The number of people who converged in Columbus left the members brimming with optimism that the association would be a force to be reckoned with. Breakfast was served and the meeting started. First on the agenda was the welfare of the youth and how they would be groomed to take over the mantle of leadership in future and how their interest in Ghana's culture and language would pique. Next was the (GAP) Group Assistance Program for all the members which was explained into details by Mr Thomas Kyeremeh of Washington DC. He said this would be like an Insurance or Welfare for the members in cases of sickness or death. Registration would start in January each year and end in December and would be renewed on yearly basis at the price of $100 per person. He advised members to take advantage and register as the benefits would outweigh the downside.. Members agreed to be one despite the fact that the former B/A region had been divided into three regions namely Bono, Bono East,and Ahafo. It was simply "United we stand, divided we fall". A communique was to be sent out to that effect. Cobaana council of elders were introduced to members and they were Nana Odeneho Osei Kwabena (Columbus), Nana Addai Duku (Calgary), Nana Kwame Effah, (Connecticut), Mr. Godfred Amo, (Washington DC) and Dr, Twum Barimah, (Toronto). Lastly, certificates were awarded to a member each from all the different associations for their hard works towards Cobaana.

Saturday night was the "real McCoy". The annual fundraising and dinner dance for the 10th anniversary started at 8.00 p.m. in the ball room of the Marriott hotel and the theme was "The health of our people is our concern". The MC was Kofi Boakye Yiadom. Guests were introduced and the national anthems of Ghana , USA and Canada were all played. Nananom were the first to come in with their retinue. Chiefs at the front and Queen mothers behind. This was the moment every member felt proud to be a Ghanaian because of the rich culture. Their Kente cloths were second to none and their gold ornaments were sparkling. Food was served and the Columbus president Ms Henrietta Agyei gave a short speech on why everybody was in that hotel. Just to raise money for our hospitals. Mr. Ampaabeng Kyeremeh of Columbus was introduced as the chairman for the occasion and other special guests like Major Rtd Derrick Oduro (Deputy Defence Minister), Mr. Ransford Antwi (CEO) Suncity fm in Sunyani and Dr, Appiah Kubi (CEO) Appiah Kubi foundation. All the chapters were allowed to dance briefly to introduce themselves whilst contributing at the same time. Dr, Appiah Kubi who was the key note speaker talked about the health situation in the former B/A region and said there were numerous challenges the people are facing like malaria, HIV, hypertension, diabetes, maternal and infant mortality. He said most of these sicknesses were preventable and urged Cobaana to help provide some medical needs for the people as he and his team of doctors with the support of Suncity fm in Sunyani were helping the citizens. He again said Cobaana should not afford a spectacle stand on health issues affecting the people but should help and present a more optimistic picture.

The president of Cobaana, Rtd Ft Lt Samuel Kofi Tandoh also advised the youth to be of good behaviour and told members to adhere to the laws of this country. The members were to carry high the flag of Ghana whenever they got the chance. He also hammered on unity among members and advised them to always respect each other in all things. Mr Baffour Awuah was in charge of the fundraising. Kofi/Amma contributions was next and members contributed according to the days they were born. Cobaana King and Queen was next in line and this year's King went to Mr. Kwame Abiew of Columbus with the Queen going to Nana Akua Amankwaa of Connecticut for the second year running. Major Rtd Derrick Oduro spoke about the newly created regions out of the former B/A and said it was good for development and also praised members for sticking together as one despite the division in Ghana. He said security in Ghana was very good when compared to other countries in the world and the country was also peaceful into the bargain. He said the one district one factory was a good thing for the development of the country and pleaded with members to bring investors into the country and also advised members to come and set up businesses to make the one district one factory a fait accompli. Lastly, members were allowed to dance non stop to different tunes ranging from 80's hip hop to hip-life.

Sunday was picnic and BBQ and at 1.30pm members started arriving at the park. 2.00pm food was ready and despite all the boasting and bragging of the Columbus chapter about abundance of food, they were able to deliver in full and not in patches. Roasted yam with peanuts, fried yam, fried red plantain, tuo zaafe (TZ), rice/chicken, hamburgers, and the almighty fufuo with greengreen soup (abubunabunu) were all there. In short food was in abundance. Certificates were again awarded to the past executives and the founders. Mr. Alex Ankomah of Toronto, Mr. Daniel Kofi Asante of Columbus, Mr. Francis Apraku of Toronto, Samuel Tandoh of Denver, Mr. Bentil Boakye Boateng of Washington DC, Mr.Paul Gyau of Washington DC, Augustine Boahen of Calgary, Mr.Ransford Antwi (CEO) Suncity Fm, Rev Kwasi Amponsah of Chicago, Mr. Sadiq Annor of Denver, Mr. Tuah of Toronto and Connecticut chapter for organizing last year's convention. Dr, Asante Krobea who is the head of Nurses and Midwifery association in Ghana and the principal of Korle Bu nurses training college gave a speech and answered important questions on health. He talked about how people should watch what they eat, exercise frequently and also check their health occasionally with their doctors. He talked about some of the causes of stroke, diabetes, hypertension etc. At 4.00pm was the dancing competition for the youth and the oldies (born before the 70's). The oldies were first to show their skills but what went against some of them was the inability to go low or bend their knees. That was enough to tell them that they were going over the hills. What took the gloss off this super convention was the rains which came down heavily during the dancing competition. As a result, it was cancelled.

The baton is now in the hands of Trenton (NJ) for next year's convention. The stage is now set for another momentous gathering and the whole world would be watching. Trenton should have the belief and conviction that they can do it and do better. COBAANA----- "Ye man nti, enye yen nti".