Ahead of polls, residents of poverty-stricken Tunis suburb left bitter 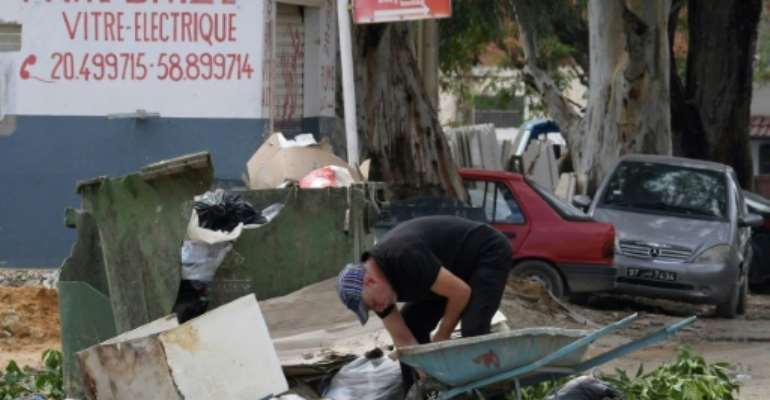 A man collects recyclable items in the impoverished Tunis suburb of Ettadhamen where unemployment is around 18 percent compared to a nationwide level of 15 percent. By FETHI BELAID (AFP)

The suburb of Ettadhamen in the Tunisian capital may have a bad reputation but it is a must on the campaign trail for presidential election candidates to show that they aim to combat poverty and social injustice.

Around 80,000 people are crammed into the impoverished suburb of barely four square kilometres (1.5 square miles), a symbol of the economic and social hardships that undermine Tunisia's transition to democracy.

On a sunny day in the runup to Sunday's presidential poll, the local mayor, Ridha Chihi, listed Ettadhamen's woes as he readied to greet Abdelfattah Mourou, candidate of the Islamist-inspired Ennahdha party.

"Flawed infrastructure, unemployment, not a single cultural centre, projects waiting to be implemented... I need to have the means, means, means," said Chihi.

A small welcoming committee made up of men, women and children waving pennants decorated with Mourou's face quickly circled the candidate as he arrived.

"I'm from the people. I sleep like you, I eat like you and I have had a miserable life like you," Mourou, a lawyer and reputed moderate, told the crowd.

A bystander, identifying himself as "single and unemployed, very unemployed", was unimpressed. "It's all an act," he scoffed.

Ettadhamen has voted for Islamists ever since Tunisia's 2011 revolt, sparked by the self-immolation of an unemployed fruit seller, which toppled Zine El Abidine Ben Ali's autocratic regime.

Tunisia has won praise for its steps towards democracy since the uprising, but it has struggled to revitalise the economy, lower inflation and combat unemployment.

Nationwide, unemployment is running at 15 percent -- rising to 18 percent in Ettadhamen -- inflation is at around seven percent and the cost of living has increased by more than 30 percent since 2016.

Abdelfattah Mourou of the Islamist-inspired Ennahdha party campaigns in the poverty-stricken Tunis suburb of Ettadhamen ahead of Sunday's presidential poll. By FETHI BELAID (AFP)

The International Crisis Group think-tank is warning against a "general crisis of confidence in the political elite" in Tunisia.

"Divisions within Tunisia's political leadership are preventing the government from addressing the country's political and socio-economic challenges," it said.

Ettadhamen residents have little trust in the promises made by politicians, be they Islamists or others.

Media mogul Nabil Karoui, who has used his Nessma television station and charity campaigns to woo hearts, is one of 26 candidates in the presidential race.

"You cannot promise people that you'll change their lives with two kilos of pasta," said schoolteacher Radhia Chebbi, a supporter of Ennahdha.

The Islamist-inspired party has voiced concern that Karoui, who was arrested for corruption just ahead of the election, is popular and could take votes away from Ennahdha.

Before his detention, Karoui for years criss-crossed the country to meet with its poorest and hand out food aid.

"Ennahdha bought votes during the 2011 (first post-Ben Ali) election, and Karaoui is doing the same thing today," according to political analyst Hatem Mrad.

The Tunis suburb of Ettadhamen has a bad reputation but it is a must stop on the campaign trail of candidates wanting to become president who are promising to fight against poverty and unemployment. By FETHI BELAID (AFP)

"Even if he is scoring points, the people are fed up with the entire political class," he said, warning that "inequality was what triggered" the uprising.

The fragile state of the economy has taken centre stage in the campaign, with candidates debating the virtues of austerity or liberalisation.

But on the streets of Ettadhamen, such discourse means little.

Mabrouka, a 62-year-old unemployed mother, lives in a one-room slum with her daughter, 24, and unemployed son aged 30.

Their hovel was filmed by journalists and presidential hopefuls have come, but nothing has changed, shouted Mabrouka's daughter before slamming the door.

Monia and Ali Maghraoui, whose home has no decorations apart from a picture of their young son, are also bitter.