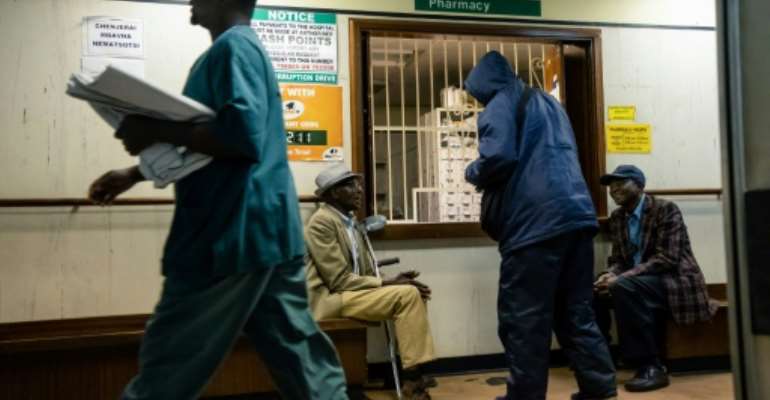 Lack of supplies and short-staffing have hit most Zimbabwe hospitals as the country struggles with economic crisis. By Jekesai NJIKIZANA (AFP)

For Zimbabwe's doctors, few institutions reflect their country's decay under Robert Mugabe than their public hospitals, once vaunted but now under-equipped and crumbling.

Mugabe, who died last week in Singapore at age 95, may have swept to power as a liberation hero, but his rule was marked by economic collapse that left his people scrambling to survive.

Zimbabwean doctors note the symbolism of Mugabe seeking treatment 8,000 kilometres (5,000 miles) from home in Singapore's gleaming Gleneagles clinic, where the cheapest suite costs around US$850 (770 euros) a day.

"It is very symbolic that the former president who presided over all the system for three decades can't trust the health system," said Edgar Munatsi, a doctor at Chitungwiza, 30 kms (18 miles) from the capital Harare.

Doctors and patients say the state of Zimbabwe's once-vaunted hospitals reflects the state of the country after Mugabe. By Jekesai NJIKIZANA (AFP)

"It says a lot about the current state of our health system."

Mugabe's death has left many debating the legacy of a man who ended white minority rule and was initially lauded for advances in public health and education.

In his nearly four-decade rule, Mugabe later brutally repressed opponents and oversaw a catastrophic mismanagement of economy that led to hyper-inflation, food shortages and misery.

Mugabe was not alone in seeking overseas care. Current Vice President Constantino Chiwenga is away for several weeks of treatment in China.

It is not hard to see why.

The hospital recently issued an internal memo warning its poorly-paid staff against "eating food made for patients."

The situation is equally dramatic in paediatrics at Harare Central Hospital, one of Zimbabwe's top clinics. Cleaning is done only twice a week, for lack of staff and detergents, doctors told AFP.

The operations are often postponed for lack of running water and nursing staff, in a country mired for two decades in economic crisis.

Since the early 1990s, the public health system has steadily deteriorated, whereas before, people came from overseas to be treated in Zimbabwe. By Jekesai NJIKIZANA (AFP)

"In theatre, we have linen full of blood and faeces and you can't do the laundry," said one doctor.

He requested anonymity, like many of his colleagues, for fear of reprisals from President Emmerson Mnangagwa's government.

Only one of three paediatric operating rooms at the central hospital is working.

"We have a four-year waiting list for inguinal hernias, the most common condition in children," says one of the specialists.

Without treatment, this hernia can cause male infertility.

Drug shortages, obsolete equipment and lack of staff: the mix is sometimes deadly.

"It is heart-breaking when you lose patients who are not supposed to die under normal circumstances," Munatsi said.

Since the early 1990s, the public health system has steadily deteriorated, whereas before, people came from overseas to be treated in Zimbabwe, recalls one senior doctor.

That is a legacy of the Mugabe years as the country was tipped into endless economic crisis -- three-digit inflation, currency devaluations, and shortages of commodities.

The state of the public health system is a legacy of the Mugabe years as Zimbabwe was tipped into endless economic crisis. By Jekesai NJIKIZANA (AFP)

In hospitals, patients and loved ones who experience the situation daily, are resigned.

"It's pathetic," says Saratiel Marandani, a 49-year-old street vendor who had to buy a dressing for his mother.

Given her age, she should receive free health care. But the reality is starkly different.

"Only the consultations are free (...) if you need paracetamol, you need to buy it yourself."

His mother will have to do without the ultrasound she needs. At 1,000 Zimbabwean dollars or 100 euros, it's beyond his reach.

Doctors say they sometimes have to pay out of their own pocket for patients' medication, or even just their bus ticket home.

At Parirenyatwa Hospital in Harare, Lindiwe Banda lays prostrate on her bed. A diabetic, she was given the green light to go home. But on condition she paid her bill.

"But I do not even have five Zimbabwean dollars (less than one euro) to pay for the transport," she said in tears.

"I can't reach my relatives. I think they have dumped me. They don't have money, but they should show some love".

If hospitals and patients are penniless, doctors too cannot escape Zimbabwe's ruin.

Medics have just begun their latest protest to demand a pay rise after salaries lost 15 times their value in a few months and consumer prices spiralled out of control.

"We are incapacitated," says Peter Magombeyi, a doctor whose salary is the equivalent 115 euros a month -- a pittance that requires to do odd jobs to get by.

"We are very aware" of the problems, says Prosper Chonzi, the director of health services in Harare.

"The health system reflects the economy of the country."