Ghanaian Businessman Raises Alarm Over Plot To Defame Him 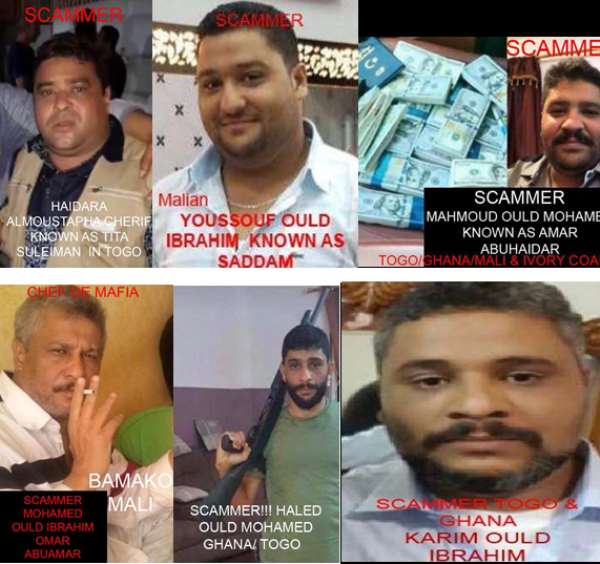 Grand machinations by Mohammed Mahamoud Ibrahim and his father Mohamed Ould Ibrahim, have been uncovered. Popularly referred to as Amar (Abuhaidar) and Omar (Abuamar) they have tried without success to defame a Ghanaian businessman, Mr Hassan Zein and his partners since the businessman (Mr Zein) discovered their dubious criminalities and diabolical acts.

Recently, this Malians (Mahamoud Mohamed and Mohamed Ould Ibrahim) succeeded in duping a Turkish businessman to the tune of several millions of dollars in Bamako Mali.

A video to that effect captured him (Omar) transacting in the alleged fake dollars scandal with the Turkish business mogul.

In the said $1m scandal, they dealt with a Turkish businessman under false pretense; posing as the Vice President of the Republic of Mali and the son posing as the Interior Minister of Mali.

They quickly relocated to Abidjan, Accra, and Lome after duping the Turkish businessman, which prompted the latter to pursue them to Accra but has failed in his attempt.

And despite an arrest warrant issued against them, their alleged connections with the President of Mali and some officials in authority makes them untouchable.

The Malians who shuttles between Ghana, Togo, Cote d’Ivoire, Niger, Burkina Faso, and their native land has allegedly duped countless Arab nationals from all over the Arab World, African nationals, European nationals, American citizens and the recent scammed the Mauritania president, businesses under false pretext.

It has emerged that they are allegedly behind a publication by Le Toguna newspaper and afrikinfosmail.com defaming Mr Zein.

As a result, lawyers of Mr Zein Justice Abdulai Esq.

have written to Le Toguna news paper and Afrikinfosmail.com to retract and apologise for the cooked story or face court action.

Below is the piece by the legal practitioners of Mr Zein copied to the Foreign Affairs Ministry, Accra and the Embassy of Mali.

We act as the Lawyers of MR HASSAN ZEIN (Our Client), and upon whose instructions we address you through the instant medium

The attention of our Client has been drawn to a publication in your online portal (with the website address fully quoted as http://www.afrikinfos-mali.com/index.php/actualites/enafrique/1075-cet-homme-hassan-zein-libano-ghaneen-operant-au-ghana-est-de-meche-avec-les-reseaux-terroristes-le-blanchiment-de-capitaux-et-de-vente-de-drogue), carried out on the 1st day of Septemeber 2019, with the picture of our Client. In the said publication, our Client observes with grave concern the magnitiude of defamatory allegations made against him by your media house, without any legal or formal basis, neither did you made any attempt to contact him to verify your claims as expected of a professional media house.

Our Client intimates to us that you published in the said article the following words, amongst others, that “This man, Hassan Zein, Lebanese-Ghanaian, operating in Ghana is in cahoots with terrorist networks, money laundering and drug sales…”. In another paragraph your publication states that “He is free in all his activities, while he is soaked to the neck in the terrorist networks. He is also, according to some sources, involved in the sale of drugs, rebellious financing and other mafia activities. But the country from which he operates knows very little or not even. The man does not fail to bribe certain executives of the police chain. It is in Ghana that he carries out his activities, we were told”.

A further defamatory comments you state are that “According to information gathered from various well-informed sources, Hassan Zein is a drug trafficker, ally to Al Qaeda and possibly to Hezbollah. It is also the source of his immense wealth with which he would finance rebellious throughout the world, perhaps even in Mali, Ancar-dine, Aqmi, and others. He has always worked to make friends with all rebellions. He maintains mafia networks one hundred percent”. The publication further states that “Worse, says our source, ‘the Ghanaian president knows nothing about his mafia activities. On the other hand, some of the Ghanaian police are aware of what Hassan is doing. Ghana’s police bosses are his friends and he is, besides, the protégé of an opponent, in the person of Ayerga Hassan”.

You finally end your publication with another statement which states “Speaking of his scams with the Arabs, our interlocutor told us formal: “It shows you fake dollars saying that it is the money of Gaddafi, Iraq, Saddam and or Mobotu. He puts the real bills on top and the fake bills down that he sells to his victims. In English calls it Four One Nine {419}”

Our Clients expresses displeasure regarding the instant defamatory publication has reduced his reputation amongst right thinking members of his peers and hurt his hard-won reputation worldwide. Accordingly, he has instructed us to notify you of his disdain of over the said defamatory comments, and notify you to apologise unconditionally to him forthwith, and withdraw the said comments with Seven (7) days upon the date of receiving the instant letter.

Our Client provides by way of setting the records straight that at all material times, he has been a dutiful, respectful and kind hearted person, whose benevolence extends far and wide. He states in no uncertain terms that the Mahamoud Mohammed Ibrahim and his father Mahmoud Mohammed Ould Ibrahim, also known as Omar, and Sixteen (16) other persons are declared wanted criminal persons in Ghana, by a Court of Competent jurisdiction for several criminal activities, including but not limited to defilement, money laundering, attempted murder and threat of death, amongst several other charges.

Our Clients insists that it is his singular act of courage and wisdom that saved your alleged informants from possible prisons sentence longer that Ten (10) years. However, due largely to the benevolence among things, that position to ensure justice for the 14 year old young girl who was defiled by Mohammed Mahmoud Ould Ibrahim, (Omar). They have all been gazetted and published on InterPol Red Alert to be arrested all over the world due to their nefarious activities. We have several newspaper and government publications that we are willing to make available to you, should you be willing to objectively peruse same at your convenience.

As a result of the foregoing, we strongly urge you to retract your publications of 1st day of September 2019, and appropriately apologise for the defamatory comments with the Seven (7) days stated supra. Should you fail to heed the call of our Clients, he has authorized us to meet your portal and the entire media house, with the biggest defamatory suit ever mounted against anyone in Mali.

Cc: The Minister His Excellency

Ministry of Foreign Affairs Embassy of Republic of Mali