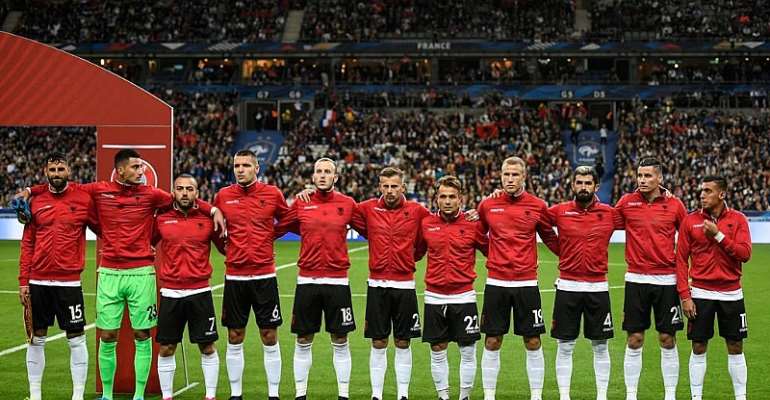 French President Emmanuel Macron has apologised to Albania after staff at the Stade de France stadium mistakenly played the anthem of Andorra and then apologised to Armenia while hosting the France-Albania Euro 2020 qualifying match on Saturday.

Albanian Prime Minister Edi Rama tweeted on Sunday that Macron apologised for playing the wrong anthem at the start of the previous evening's match, in which France beat the Albanians 4-1.

“President Macron presented his sincere apologies for the scandalous gaffe by the French football federation with our national anthem,” Rama tweeted.

“The French President considered the gaffe as an 'unacceptable error' and he appreciated the reaction of our players,” he added.

The French presidential office confirmed Macron had made the apology.

Albanians bemused hearing wrong anthem
Before kick-off on Saturday evening, the teams took to the pitch where stadium staff were holding each side's national flag, along with the likeness of a French football jersey and two stars representing France's two world championships.

The Albanian players were clearly bemused and many fans booed and made angry gestures.

The mistake was not immediately apparent to most French fans, who launched into a rousing rendition of France's anthem, “La Marseillaise”.

But the kick-off was delayed seven minutes after the Albanian side refused to begin until the correct anthem was played.

Another embarrassing incident occurred when the announcer apologised to “Armenian fans” and asked spectators to respect the “Armenia national anthem”, before realising and correcting his error.

The mood quickly improved as the correct anthem, “Himni i Flamurit”, came from the speakers at a noticeably higher volume, leading to smiles, singing and celebration among the Albanian fans and players and general applause in the stadium.

At half-time, with the hosts leading 2-0, the announcer came on once more to apologise to Albania on behalf of the French Football Federation (FFF), which was responsible for the logistics of the match.

Human error
Macron's apology was preceded by those of French football officials, including coach Didier Deschamps, who apologised to the Albanian bench and coach.

“It's something that should not happen, but it did happen,” Deschamps told reporters.

“We discussed it with the referee, and I completely understand the position of the Albanians,” Deschamps added. “It's logical that we waited until the Albanians could have their anthem before the match.”

Noël Le Graët, president of the FFF, also presented his apologies to his Albanian counterpart and to the Albanian ambassador to France, both present in the tribunes.

“It was a big thing,” said the Albanian team's coach Edoardo Reja, an Italian. “The players said they wouldn't start without the right anthem.”

Frederic Veseli, an Albanian defender, sought to strike a balance in his response to the gaffe.

“It can happen, it's human error,” he said. “During the tests, someone could have verified the choice. This error could have been avoided. But I don't hold anything against the person who did it. Anyone could have made this mistake.

“It was clear that we did not want to start before the anthem was played,” he continued. “The audience applauded during the anthem. It was a good gesture.”

Aside from the first letter of the alphabet, Albania and Andorra are both in Group H in the Euro 2020 qualifying round, and France is slated to host Andorra at the Stade de France on Tuesday for the next qualifying match.

It is possible that both states' anthems were cued up and that whoever was responsible for the gaffe simply made the wrong choice of two options.

Aside from the blunder of playing the wrong anthem, the incident has not provoked any apparent historical animosity between the former Soviet satellite republic and the small Pyrenees Mountains principality.

Andorra's national team even took the opportunity to poke fun at France looking ahead to the match.

“Do you miss us that much, Team France? Keep calm, Tuesday is fast approaching,” the Andorran Football Federation tweeted.