Protests as Morocco journalist goes on trial for alleged abortion 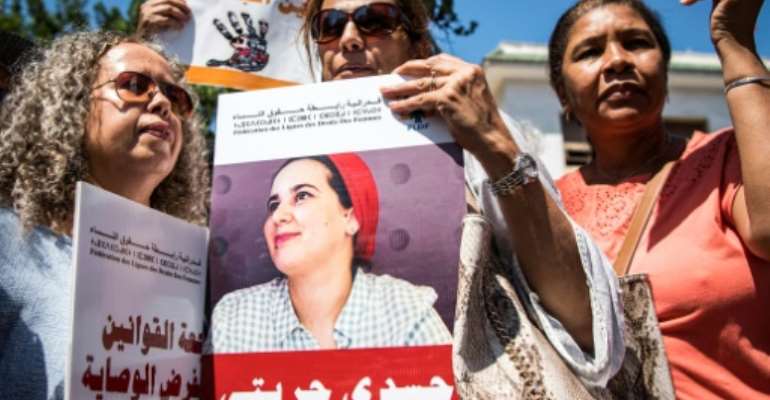 Demonstrators protested outside a Moroccan court as the trial opened of journalist Hajar Raissouni, accused of having a late-term abortion and sexual relations outside of marriage. By FADEL SENNA (AFP)

Hundreds of people protested Monday in front of a Moroccan court as the trial opened of a journalist accused of having a late-term abortion and sexual relations outside marriage.

The case brought against Hajar Raissouni, who writes for the Arabic-language daily Akhbar Al-Yaoum, has triggered a furious debate in the media and online about civil liberties and freedom of the press in the north African country.

The protesters shouted out "Freedom for Hajar" and "Our society is in danger", and brandished placards urging "My body, my freedom" and "No, to the criminalisation of sex between consenting adults".

The 28-year-old, whose paper has a history of run-ins with the authorities, risks up to two years in prison if found guilty under the penal code which bars sex before marriage and abortion, except if the mother's life is in danger.

She was arrested on August 31 as she left a clinic in Rabat, where her lawyer Saad Sahli said she had been undergoing treatment for internal bleeding.

But the prosecution insisted she had been seen by a medic last week and showed signs of pregnancy and of having undergone a "late voluntary abortion".

In a statement, it stressed her detention had "nothing to do with her profession as a journalist".

Raissouni, who is religiously but not yet legally married, had been due to wed her Sudanese partner this week. He was also arrested at the same time, along with the doctor, a nurse and a secretary.

"Instead of intimidating Hajar Raissouni by prosecuting her on unjust charges, the authorities should immediately and unconditionally release her," said Heba Morayef, Amnesty's regional director, last week.

Ahmed Benchemsi, regional communications director at HRW, echoed Morayef's call for all charges to be dropped.

The case had "a whiff of political manipulation since the defendant is a reporter" from one of Morocco's few remaining critical newspapers, he said.

Touafik Bouachrine, the owner of Raissouni's newspaper, was sentenced in November to 12 years in prison on charges of rape and other offences.

He also denies all charges and his lawyers say his trial was politically motivated.

According to official figures, Moroccan courts last year tried more than 14,500 people for "debauchery", 3,048 for adultery, 170 for homosexuality and 73 for having abortions.

However, NGOs say between 600 to 800 women have clandestine abortions every day in the country.