Pope Francis worried about drug use in idyllic Mauritius 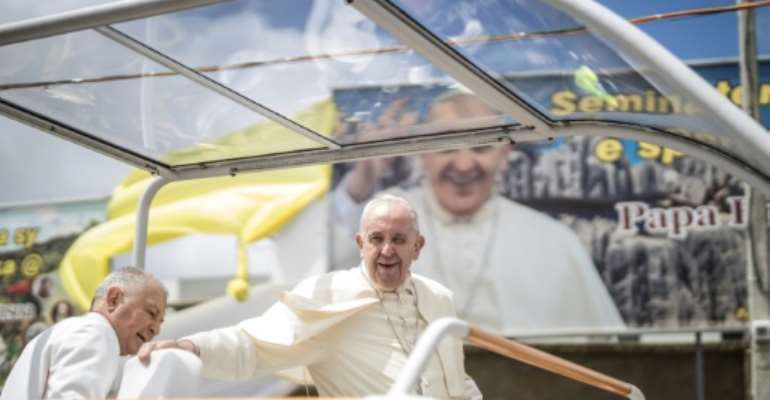 Pope Francis expressed concern Monday about growing drug use among the youth on the paradise island of Mauritius, as he wrapped up an Africa tour with a whistle-stop visit to one of the continent's most stable, prosperous nations.

Throngs of cheering faithful waving palm fronds lined the streets of Port Louis as the popemobile shuttled the Argentine pontiff to the hilltop Mary Queen of Peace Monument where he delivered his mass.

Organisers estimate 100,000 attended the service during the first papal visit since the one by John Paul II in 1989.

While the island is a beacon of stability and relative prosperity, Pope Francis honed in on the struggles of the youth, who face growing inequality, unemployment and the scourge of drug abuse. 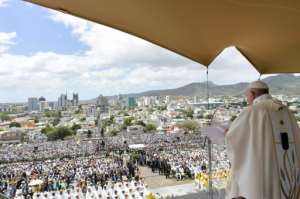 "It is a hard thing to say, but, despite the economic growth your country has known in recent decades, it is the young who are suffering the most. They suffer from unemployment, which not only creates uncertainty about the future, but also prevents them from believing that they play a significant part in your shared history," said the pope.

"Uncertainty about the future makes them feel that they are on the margins of society. It leaves them vulnerable and helpless before new forms of slavery in this 21st century."

"Let us not allow those who deal in death to rob the first fruits of this land," he said.

According to a Mauritius Drug Observatory report in 2018, the smuggling and use of drugs such as heroin, cannabis, cocaine and methamphetamine, has grown in recent years.

Some waited for the pope from before dawn, and many faithful were dressed in the yellow and white of the Vatican flag, coming from near and far.

Giant screens were put up in Port Louis to allow devotees to watch the papal mass, and billboards adorned with Francis' image have sprung up across the coastal city.

"I am very happy to be here today. It is a great joy to see the pope on Mauritian soil .... we thank the lord for that," said Brinda, who came from the south-west of the island nation to attend the mass.

It is a melting pot of religions and ethnic backgrounds. 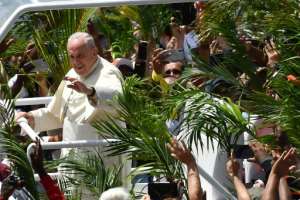 Throngs of cheering faithful waving palm fronds lined the streets of Port Louis as the popemobile shuttled the Argentine pontiff to the hilltop Mary Queen of Peace Monument. By Tiziana FABI (AFP)

The island was uninhabited when first visited by explorers in the Middle Ages, and was later briefly colonised by the Dutch, French and the British.

Since independence in 1968, Mauritius has developed from a poor, agriculture-based economy, to one of Africa's wealthiest nations.

It is best known for its position as a global tax haven and idyllic tourist beach destination. 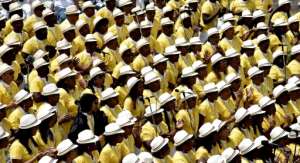 Many faithful were dressed in the yellow and white of the Vatican flag. By TIZIANA FABI (AFP)

General unemployment is low compared to the rest of the continent at 6.9 percent in 2018 according to the World Bank, but is high among the youth at 22 percent and inequality is seen to be rising.

The pope is on the last stop of his tour which has taken him to Mozambique and Madagascar, two of the world's poorest nations. 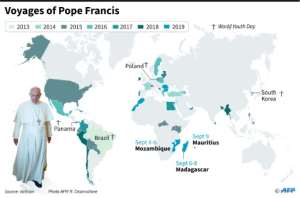 The pontiff will also meet with President Barlen Vyapoory, whose role is largely titular, as well as Jugnauth.