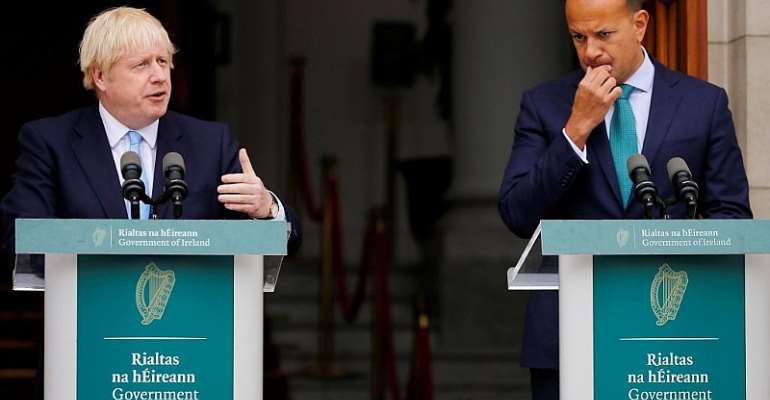 Three months after stepping into the British Prime Minister's shoes, Boris Johnson has a lot on his plate this Monday. Details below.

Boris Johnson headed off to Ireland on Monday to meet his counterpart in Dublin, Leo Vadarkar. On the agenda is one of the thorniest Brexit-related issues, the border between Northern Ireland and the Republic of Ireland in a post-Brexit, possible no-deal scenario.

Meanwhile, members of the UK government and MPs will vote on the Prime Minister's bid to hold elections next month.

What's on the agenda, what's at stake

Johnson wants to consolidate his position as Prime Minister and the Conservative Party's position as governing party ahead of his proposed no-deal Brexit on 31 October.

He lost the government majority when Philip Lee, MP for Bracknell in the south of England, joined the opposition Liberal-Democrats last week

His predecessor Theresa May, a so-called 'Remainer', took a similar path shortly after she'd taken up the Brexit hot potato dropped by David Cameron after the result of the Brexit referendum showed about four per cent more of eligible voters preferred to leave the European Union than stay. May, instead of consolidating her government's position, found herself having to juggle a tricky coalition with hardline Northern Irish loyalists in the DUP.

The current rucky British political situation, after the resignation of 21 Conservative party members including ministers, is exceptional.

The opposition refuses to vote for the elections on 15 October unless Johnson gives them guarantees that Britain will qui the EU with a deal to which they agree.

Loaded dice
Mathematically, Johnson's bid looks likely to fail. The election motion has to be passed by at least two-thirds of the House of Commons, which is 434 votes.

The main opposition Labour Party has 247 seats out of the total 650.

In last week's vote on the same motion, only 298 MPs were in favour.

The dividing line
The opposition parties, in the main Labour and the Liberal-Democrats fear that if elections are held so soon, given very recent opinion polls, Johnson could win the blessing of a majority of voters to stream ahead with the no-deal option.

The opposition backed by 21 dissident Tories passed a law to force the Prime Minister to ask the EU to postpone Brexit until the end of January 2020 if there is no-deal before 19 October.

The government decided that British ministers would attend fewer EU meetings as of this month.

In spite of all that Johnson has said about the no-deal and the 31 October deadline, he has however since the parliamentary failures of last week, tried to convince his ministers and party that he is still negotiating for deal.

Chancellor of the Exchequer Sajid Javid said that the prime minister would attend the European Council on 17 and 18 October, in the hopes of bringing back a deal.

Reinstating customs controls between Eire and Northern Ireland are unthinkable for many in the EU and even in the UK. The EU has developped the idea of the so-called 'Back-Stop' which would prevent this happening. France for one repeated its support of the Back-Stop when President Emmanuel Macron met Boris Johnson in August 2019.

Hardline Brexiteers and Northern Ireland loyalists do not agree, and believe that the same conditions should apply to Britain's only Brexit-related EU-UK land border as with other borders.

Varadkar has aleady said he is not expecting any significant developments during his meeting.