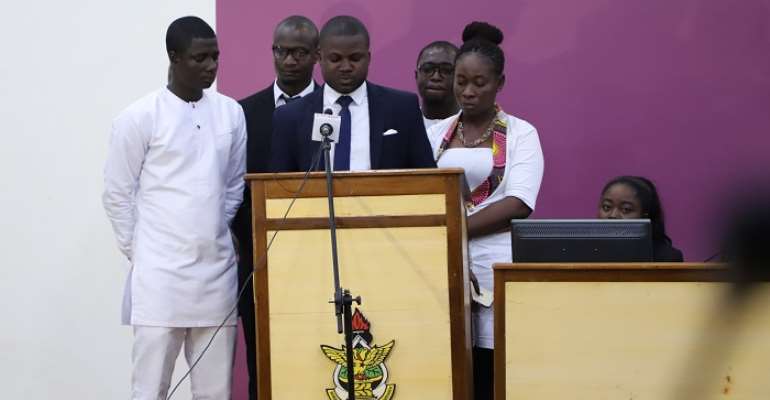 The Graduate Students Association of Ghana (GRASAG) want the immediate withdrawal of the Public Universities Bill which has been drafted by the government, pending parliamentary consideration and approval.

According to the president of GRASAG, Samuel Sagoe, the association “has strong reservations against the bill and calls for an outright withdrawal of the bill from our public discourse.”

“It is our considered view that, laws are essentially made to solve societal problem or cure a mischief. However, certain provisions of this bill only create the avenue for mischief and largely destroy academic freedom,” he said.

Mr. Sagoe added that “the drafters of this bill may have good intentions but leaving certain provisions of the bill the way it is now will only create avenue for a politician with ill intentions to manipulate and unduly control policy directions, appointments and promotions of our public universities in Ghana.”

Speaking at its handing over ceremony held over the weekend at the Kwame Nkrumah University of Science and Technology (KNUST), the president of GRASAG also called for the relocation of the Pan African Parliament from South Africa. This follows the recent xenophobic attack on some Africans from the former apartheid country.

Mr. Sagoe stated that “the continual nasty and inappropriate act of brutality on some Africans who are going about their normal duty in a fellow African country is unacceptable.”

“The danger is that, the same hatred if not curtailed could be extended to foreign students pursuing their post graduate studies in South Africa. And this is why GRASAG is worried.” He said.

Mr. Sagoe also condemned the rather weak verbal intervention of the President of South Africa, Cyril Ramaphosa, which sought to claim that the action is the handiwork of criminals and the subtle attempt by the South African High Commissioner to Ghana to justify the barbaric acts, stating that the sayings of these officials “rather give credence to the fear of many that officialdom has sanctioned the attacks.”

The GRASAG President also used the opportunity to highlight some activities that the Association intends to embark on in this academic year.

LGBTQI+ debate: Be tolerant of each others views — Akufo-Add...
54 minutes ago