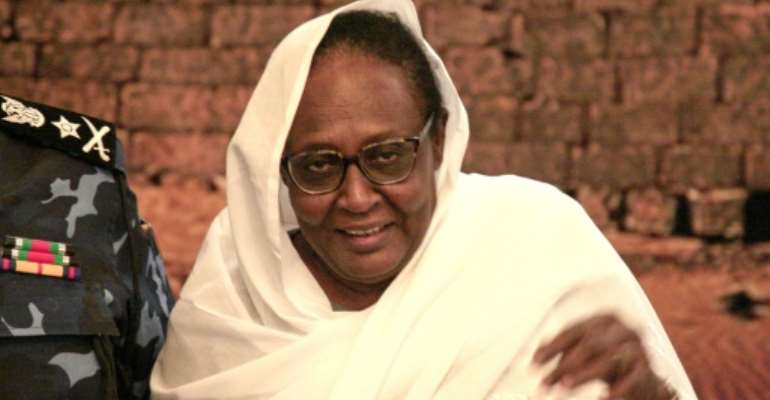 Sudan's new Foreign Minister Asma Mohamed Abdalla, the country's first ever female foreign minister , is pictured after taking the oath at the presidential palace in the capital Khartoum. By Ebrahim HAMID (AFP)

Born in 1946, Abdalla was sworn in on Sunday as a member of the country's new 18-member cabinet, the first since Bashir was overthrown by the army in April.

Bashir, who had seized power in an Islamist-backed coup in 1989, was deposed following months of nationwide protests against his ironfisted rule.

Dressed in a white traditional Sudanese tobe and wearing spectacles, Abdalla took the oath as foreign affairs minister at the presidential palace along with 17 other ministers.

The swearing-in ceremony was held in the presence of members of the joint civilian-military ruling sovereign council, including its chief General Abdel Fattah al-Burhan.

The sovereign council will oversee a 39-month transition period as Sudan embarks on the road to civilian rule, the main demand of protesters.

Abdalla, whose studies were partly in the United States, was one of the first three women to join Sudan's foreign ministry as a diplomat after graduating from Khartoum University in 1971 with a degree in economics and political science.

But she was sacked in 1991 by the then administration of Bashir, who had seized power two years before in a coup.

Abdalla's appointment is part of new Prime Minister Abdalla Hamdok's plan to have a government made up of technocrats and one that reflects gender balance.

Hamdok himself is a seasoned economist who built a career in international organisations, most recently as deputy executive secretary of the UN's Economic Commission for Africa in Addis Ababa.

"By having women ministers like Asma Mohamed Abdalla, Sudan is putting across a positive image to the world," a European diplomat told AFP on condition of anonymity.

"Sudan is showing that it is changing... and is no more a pariah state as it was during the Bashir years."

Members of the Sudanese cabinet are sworn in in the presence of new Prime Minister Abdalla Hamdok (back-L) and General Abdel Fattah al-Burhan (back-C), the head of Sudan's ruling sovereign council, at the presidential palace in Khartoum. By Ebrahim HAMID (AFP)

Decades of sanctions imposed by Washington on Khartoum had isolated Sudan from the international community.

The sanctions, imposed in 1997, were lifted in October 2017 but Washington has kept Sudan on its list of alleged state sponsors of terrorism, making foreign investors wary of doing business with the African country.

Experts say a priority for Abdalla as foreign minister would be to navigate negotiations with Washington on removing Sudan from the terrorism blacklist.

The other key foreign policy file for Khartoum is Cairo, with whom Sudan has often had strained ties due to trade and border issues.

Cairo, however, has been a steadfast ally of the generals who seized power after the army ousted Bashir.

On Monday, Abdalla met in Khartoum with her visiting Egyptian counterpart Sameh Shoukry.

Abdalla had served as a diplomat in several overseas Sudanese missions, including at the United Nations, in Morocco and Stockholm.

After she was sacked by Bashir, Asma worked in regional organisations including the Arab League. In 2009, she set up a bureau offering translation services.

Abdalla, whose husband has also worked with the United Nations, has one daughter.