The Theatrical Farce of Reducing the Great Achievements of Dr. Danquah to the Kyebi Ritual Murder 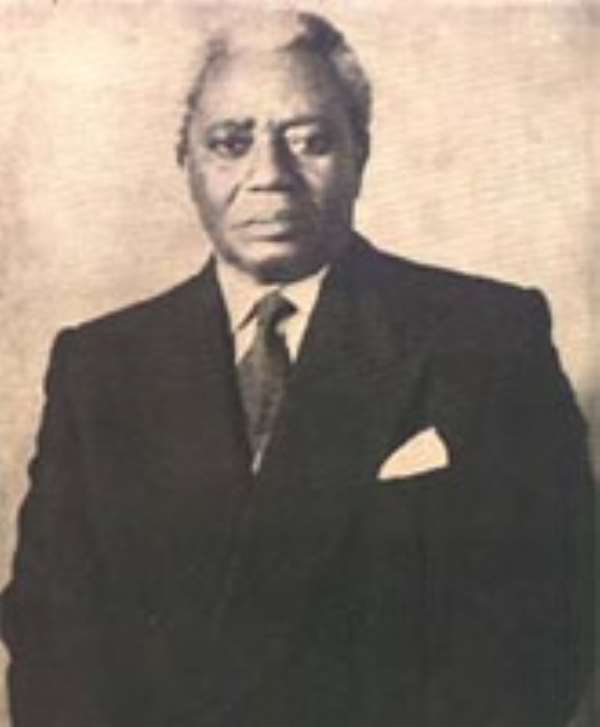 If, indeed, it is factually accurate that “The Kyebi Ritual Murder accelerated the campaign for the independence of present-day Ghana,” as the ardent anti-Danquah and pro-Nkrumaist propagandists claim (See “The True History of Dr. JB Danquah that Should Be Taught in Schools” DailyMailGh.com / Ghanaweb.com 4/18/19), then, of course, it inadvertently goes without saying, at least on the part of his most inveterate detractors, including the globally immortalized President Kwame Nkrumah, that Ghanaians have been criminally lied to for the past 62 years and still counting. And that the one greatest or most significant factor in the push for Ghana’s reassertion of its sovereignty from British colonial imperialism is the grisly martyrdom of this writer’s own maternal granduncle, to wit, the man Nana Akyea-Mensah, The Legendary Odikro or Townshead of Akyem-Abuakwa, and not either Mr. Kwame Nkrumah or even Dr. JB Danquah, the man who gave the erstwhile Gold Coast Colony its postcolonial name of Ghana.

So why are the passionately anti-Danquah and fanatically pro-Nkrumah propagandists not vigorously campaigning for the University of Ghana to be renamed after Barima Ohemeng – aka Nana Akyea-Mensah – instead of Dr. Joseph (Kwame Kyeretwie) Boakye Danquah, the man who did more than any other Ghanaian citizen of his generation and his time, both legislatively and in terms of both public-opinion mobilization and resource or material mobilization for the establishment of the country’s oldest and foremost flagship academy, namely, the University of Ghana? Now, isn’t it a screaming shame that absolutely no national landmark or monument has been named or renamed after the man who, according to the ardent Nkrumaist propagandists themselves, selflessly shed his own blood as well as sacrificed the economic comfort and well-being of his family and his subjects for the greater good and dignity of Modern Ghana or Postcolonial Ghana?

And just whose fault is this, but the pathological and megalomaniacal Mr. Kwame Nkrumah who narcissistically and fascistically attempted to name nearly every significant national landmark or monument after his mother and himself, except the very martyr who, by all standard Nkrumaist accounts, made the political accession and existential immortality of the African Show Boy possible in ways that might have been unrealizable had the twists and turns of Akyem-Abuakwa History not brought Nana Akyea-Mensah to the forefront of Ghana’s independence struggle.

Indeed, recently, I have been giving this matter much more significant thought than I have done in the past. For instance, I have wondered why the National Forensics Laboratory of the Ghana Police Service, in Accra, for example, has not been renamed as the Akyea-Mensah Memorial National Labs/Laboratories – the slain man’s mortal remains were never recovered, contrary to what some authorial sources would have the rest of us believe - or even the Headquarters of the Ghana National House of Chiefs not be renamed the Akyea-Mensah National House of Chiefs or simply Akyea-Mensah House; I am here also, of course, thinking about the edifice of the Ministry of Culture and Chieftaincy Affairs, or whatever the ministerial portfolio of the latter establishment may be called these days.

You see, the metaphorical martyrdom of Nana Akyea-Mensah is strikingly akin to the martyrdom of the Asante Nation’s King Tweneboa Kodua of Kumawu, who has been immortalized and glorified as a hero who voluntarily sacrificed his life and blood as a means of putting a definitive end to the perennial enslavement of the Asante people by the politically extortionate Denkyira slavocrats. Odikro Akyea-Mensah was also fully cognizant of the fact that his single-minded and radical decision to put a definitive end to the kind of savage human sacrifice that accompanied the burial of our Paramount Kings was bound to be fiercely and equally barbarically resisted by possibly having his own life taken and his blood bestially spilled in response. Well, I irreparably lost my beloved maternal granduncle and another beloved paternal great-granduncle lost a significant portion of his stature, status and political clout and dignity in Ghanaian society, the very society whose new name of Ghana was the direct fruit of his genius and erudite scholarship. But, of course, it was all for the greater good, dignity and integrity of the New Ghana writ large and globally renowned.