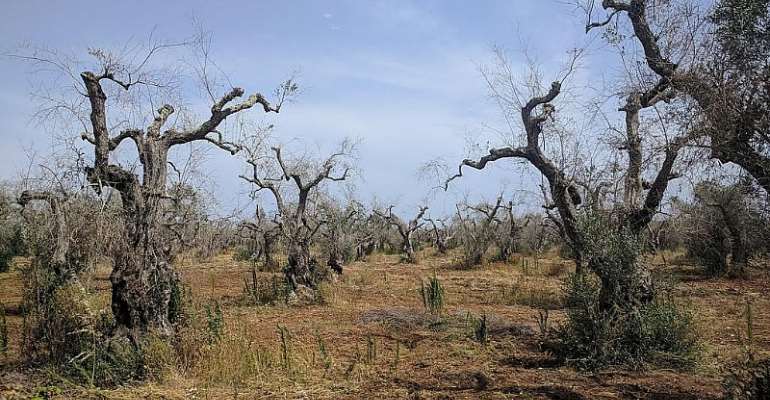 For the first time, olive trees in France have been infected with the deadly Xylella fastidiosa bacteria which has already destroyed more than a million trees in Italy.

France's agriculture ministry said that two decorative olive trees in southern France - one in Antibes and the other in Menton - had been found to be infected and described it as a "health threat for agricultural production".

It's the first time the bacteria has been identified on an olive tree in France, although the disease was found on other plants in southern France and on the island of Corsica in 2015.

When, in 2015, a coffee plant infected with Xylella fastidiosa was found in Rungis food market near Paris, researchers maintained there was no need to panic and that there was no guarantee it would spread.

And yet it has done just that.
The bacteria, which is carried from tree to tree by a little bug, cannot be killed directly and the only way to fight the spread of the disease, known as "olive tree leprosy", is to destroy diseased trees.

The ministry said the two trees would be destroyed in the coming days, and all other plants particularly vulnerable to the bacterium within a five-kilometre radius would be pulled up to try to prevent contamination.

Botanist Anne Breuil described the bacteria as “one of the most dangerous, since there is no way of fighting against it. We can only fight the insects [leafhoppers] that transmit it,” she told 20 Minutes.

The bacteria does not only affect olive trees; it can impact more than 300 species of plant, and symptoms can sometimes take a while to appear.

Xylella fastidiosa began attacking olive trees in 2013. Countries co-operate in trying to help stop the spread of the disease, but it's complicated. In 2018 the European Commission referred Italy to the Court of Justice for failing to adequately prevent the further spread of Xylella fastidiosa in the Apulia region.

Xylella fastidiosa was first seen in the 1880s in California, USA, where it affected vines. It is also found across the Americas, and in Taiwan.

Although it cannot survive at very cold temperatures, it can be spread by contaminated produce - or the insects themselves - from one region to another.