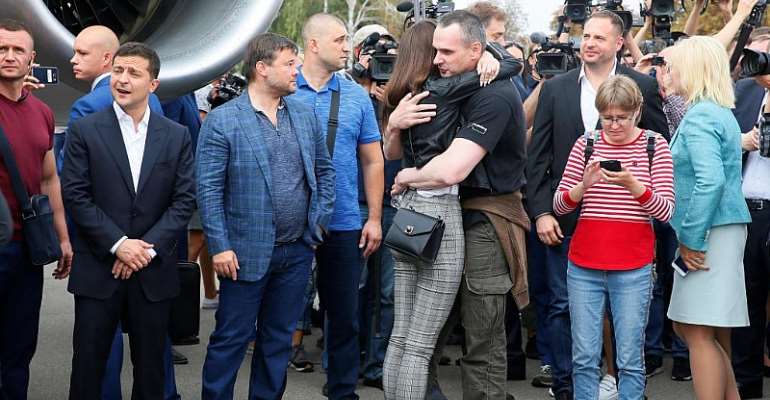 Russia and Ukraine have made a long-awaited swap of 70 prisoners, a deal hailed as a first step towards ending five years of tension and conflict. France, Germany and the US welcomed the deal, but the Netherlands branded the swap “disconcerting”.

Two planes carrying 35 prisoners from each side landed simultaneously on Saturday in Moscow and Kiev.

"We have taken the first step," Ukrainian President Volodymyr Zelensky said on the tarmac after greeting and hugging former detainees. "We have to take all the steps to finish this horrible war."

In emotional scenes at Kiev's Boryspil airport, family members embraced and handed flowers to the former prisoners, many weeping with joy.

According to Dutch national broadcaster NOS, Dutch ruling parties CDA and D66 call Tsemakh's handover “bizarre” and “disconcerting”. Family members of the victims accuse Russian president Vladimir Putin of sabotaging the investigation into the MH17 downing, which cost the lives to 298 passengers and crew in 2014.

But other western leaders welcomed the exchange, with US President Donald Trump saying it could be "a first giant step to peace" and German Chancellor Angela Merkel calling it a "sign of hope".

French President Emmanuel Macron hailed the release of Sentsov in particular, saying in a tweet that "we have always been by his side".

Annexation of Crimea
Anticipation had been building for the swap, which involved weeks of behind-the-scenes negotiations.

Relations between Kiev and Moscow nose-dived in 2014 when Russia annexed Crimea and Moscow backed separatists in the eastern industrial regions of Donetsk and Lugansk. Fighting there has claimed more than 13,000 lives over the past five years.

Following the swap, France's foreign and defence ministers, Jean-Yves Le Drian and Florence Parly, will meet their Russian counterparts in Moscow on Monday, in the first so-called "2+2" format since Russia seized Crimea in 2014.

The annexation conjured up the spectre of the Cold War, and Europe's mistrust of Moscow has only hardened since as Putin has opposed the West on crises including Syria and Venezuela.