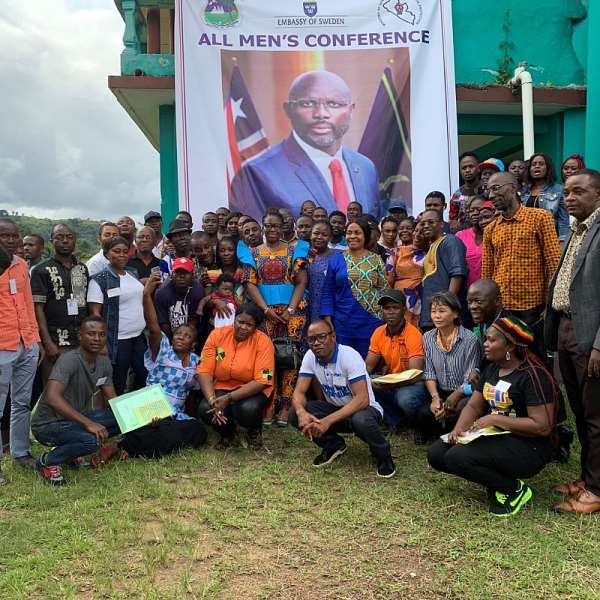 (Monday, September 9, 2019 - Monrovia, Liberia) - Gender, Children and Social Protection Ministry has successfully conducted a two-day All Men's Conference in Tubmanburg, Bomi County. The conference which ran from (September 4-5, 2019) was held under the theme "Men Bridging The Gap For Gender Equality in Liberia", it drew participants from diverse sphere of society including Traditional male leaders, Heads of civil society, Heads of Non-Governmental Organizations, Youth and Students groups, Motorcyclists, Male media practitioners, Religious leaders, County leadership and Political Parties. The conference was aimed at strengthening men's involvement in advocacy of key issues affecting women and children and enhancing men's access to information around women issues.

All Men's Conference is an annual rotational event organized by the Ministry of Gender, Children and Social Protection with specific focus on having more committed "HeForShe" champions that will lead male involvement campaign on ending gender inequalities and other issues that affect women and children in all sectors of the society.

Williametta E. Saydee-Tarr, Minister of Gender, Children and Social Protection told participants that it is the collective responsibility of both genders (Males and Females) to create a safe space for the purpose of honest conversations around issues affecting women and girls—but with a distinct specification that Men have a key role to play in addressing these issues.

According to Minister Tarr, the All Men's Conference will continue to provide Men with needed information in order to serve as agents of change at both national and local levels to promote behavioral change against violent masculinity, which potentially orchestrates sexual and gender based violence.

"I am delighted to be able to make it here in a gathering of what I would refer to as a collection of esteemed men who have committed themselves to promoting “Gender-Equality” across all spheres of the Liberian Society. I cannot think of a more remarkable moment to strive for Gender Equality in Liberia, than now". Minister Saydee-Tarr added.

The Gender Boss stressed that issues affecting women and girls have been on an increase in Liberia, whether it is domestic violence; which includes rape, economic deprivation of women and girls, physical or emotional abuse, inequality in the workplace and income disparity between working men and women. Hence, the Ministry of Gender in collaboration with its partners—particularly the Swedish Government and UN Women, recognizes that these issues do not only affect women and girls, but affect the overall socio-economic advancement of our society.

"Based on the different presentations you have listened to, including the ones on the “National Gender Policy” and “Gender in Development Planning” and also the interactive discussions and breakout sessions, it is my expectation that you have, or will gain some very useful information that will further help you gain deeper insights on key issues affecting women and children in Liberia; encourage more men dialogue and improve your understanding on the significance of men’s role in advocating against gender inequality". Minister Williametta E. Saydee-Tarr concluded.

Gender appreciates H.E. George Manneh Weah, President of the Republic of Liberia, for his relentless commitment to promoting gender equality in Liberia as a premiere HeForShe Champion.