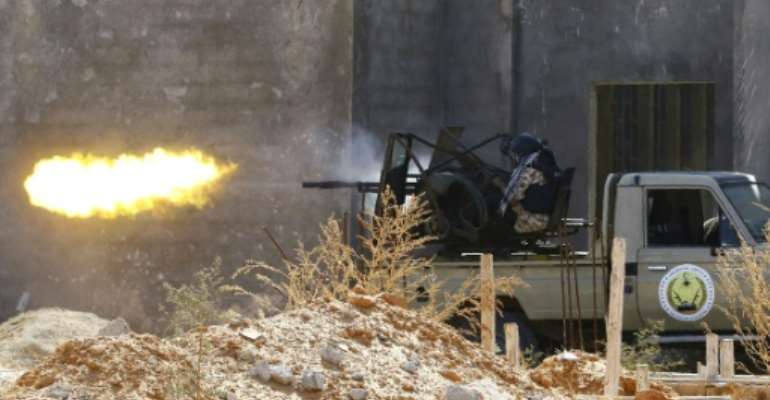 Five months since Libyan strongman Khalifa Haftar launched an assault to seize Tripoli from the UN-recognised government fighters from both sides have been locked in a stalemate in the capital's outskirts. By Mahmud TURKIA (AFP)

Libya's UN-recognised government Sunday slammed the UAE for hosting an officer of forces loyal to strongman Khalifa Haftar, who has waged a months-long offensive to take the capital Tripoli.

The Tripoli-based Government of National Accord denounced the "hostile position of the United Arab Emirates", which has allowed Abu Dhabi to be used as "a media platform for militias attacking the Libyan capital".

The statement comes a day after the spokesman for Haftar's self-styled Libyan National Army held a news conference in the UAE capital, during which he ruled out a UN call to return to the negotiating table.

"The time of going back to dialogue is over," said LNA spokesman General Ahmed al-Mesmari.

"The military solution is the best solution to spread security and reimpose the law."

Libya has been wracked by chaos since the 2011 uprising in which its longtime leader Moamer Kadhafi was killed.

In April, Haftar's LNA launched an offensive to conquer Tripoli, but five months on, his forces remain locked in a stalemate on the capital's outskirts.

The fighting has killed at least 1,093 people and wounded 5,752, while some 120,000 others have been displaced, according to the World Health Organization.

Haftar's forces are fighting militias backing the GNA, which is led by Fayed al-Sarraj.

Sarraj is backed by Turkey and Qatar, while Haftar enjoys varying levels of support from Egypt, the UAE, the United States, Russia and France.

In its Sunday statement, the GNA accused the UAE of giving the floor to a "militiaman" and "mouthpiece" of Haftar, "who supports a military regime and rejects a civil and democratic state" in Libya.