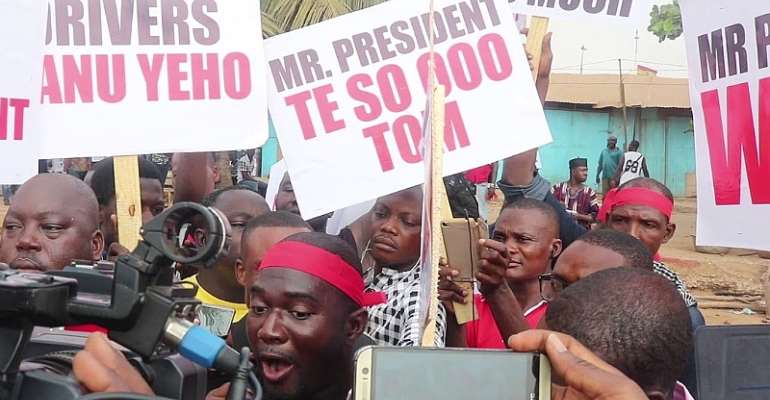 The National Secretariat of the General Transport, Petroleum and Chemical Workers Union (GTPCWU) of TUC (Ghana) has raised concerns the incessant increases in fuel prices and its impact on prices of other goods and services.

According to the Union, Ghanaians are struggling as result of the frequent hikes in fuel prices.

In a statement, the Union reminded government to be mindful of the implications of these sharp increases in taxes on Ghanaians and take steps to relieve them.

“Fuel prices are being increased indiscriminately. This development does not bode well for the living conditions of workers, their families and Ghanaians in general and it must be halted”, the statement added.

We call for decorous discussions about ending the suffering of workers and Ghanaians.  Government must seek to fulfill its promise of making the lives of Ghanaians better.

“We are calling for a reduction in the taxes to ease the difficulties of workers. We hope and believe that this piece will go a long way to send a signal to government on the appalling and harsh conditions faced by the Ghanaian worker and the society in general to enable it take a position to rectify them without delay. “

It emerged that, pump prices have shot up from the previous GHc 5.19 per litre to about GHc5.39 for a litre representing a 3.7% jump in previous figures at the pumps.

Energy think tank,  the Chamber of Petroleum Consumers (COPEC) attributed the recent fuel hike to the increase in some components of the energy sector levies.

COPEC in the statement insisted that the fuel increases should be  reversed  t o reduce the plights of petroleum users. High fuel prices vs. low salaries

The group also contended that the Ghanaian worker has not seen the same percentage increases in wages  and that, its yearly comparison show that fuel prices changes has been astronomical with same eroding the purchasing power of workers.

“The meager salaries received by workers coupled with increased taxes on PAYE, water, electricity and communication is detrimental to the welfare of Ghanaian workers and their families. At the same time, workers and Ghanaians cannot link the higher taxes that confront them with any appreciable improvements in basic economic and social circumstances of the country.” 'NPP gov't has developed so much appetite for taxation' – Minority

Already, the Minority in Parliament has demanded a withdrawal of the recent upward review of taxes on petroleum products.

It says such a move will bring down the prices of fuel and other petroleum products.

Some Oil Marketing Companies increased the price of fuel due to the kicking in of tax adjustments to the ESLA levies.

Adam Mutawakilu who is a Ranking Member parliament's committee on Mines and Energy said the recent increase in fuel prices cannot be justified.

“Government has been blaming all these increments on international crude oil price and the depreciation of the cedi. But, what makes this one different and more insensitive is the fact that this is not a result of international crude oil prices or exchange rates issues, it is the imposition of more taxes. The government when in opposition, propagandized and captured in their manifesto that they were moving this country from taxation to production but all of a sudden it has developed so much appetite for taxation”, he criticized.

LGBTQI+ debate: Be tolerant of each others views — Akufo-Add...
48 minutes ago