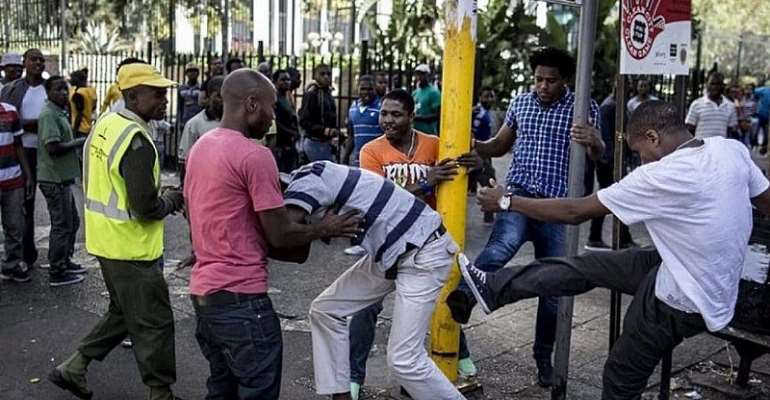 There is nothing more loving than offering a helping hand to a dying brother and sister in desperate situation. This is what the whole of Africa did for South Africa during the cry of apartheid and its associated distress. We thought you've got our back, but you stabbed us in the back. This is not what Mandela fought for. No amount and extent of condemnation of this periodic heinous act can erase the fear, disappointment and the uncertainty in our hearts even as we join hands and walk the journey of a United Africa. Whiles we condemn South Africa, same should be said about the disgraceful and inhumane attack on foreign traders, particularly Nigerians Spare parts dealers at the Kumasi Suame Magazine establishment on 17th July 2019 and the reprisal attacks on perceived South African businesses in Nigeria in the wake of the recent Xenophobic Attack on African Nationals in South Africa.

African Nationals in South Africa, including refugees and asylum-seekers continued to face xenophobic violence and threats of violence to date. Whilst we agree that South Africa also suffers from limited economic opportunities for it citizens, it cannot go unmentioned, the failure of successive South African Governments in changing and balancing the scale of the very colonial systems and structures that oppressed dark-skinned South Africans and gave overwhelming social, economic and political privileges and protection to Fair-Skinned South Africans after gaining their freedom from apartheid White government under the leadership F. W. de Klerk in 1994.

Evidence from the 2019 Human Rights Watch World Report clearly points to the unpreparedness of the South African Government in dealing with perpetrators of the past and current xenophobic Attacks. Human Rights Watch World Report (2019, p. 257) titled Accountability for Xenophobic Attacks on Foreign Nationals established that “virtually no one has been convicted over past outbreaks of xenophobic violence, including for the Durban violence of April 2015 that displaced thousands of foreign nationals, or the 2008 attacks, which resulted in the deaths of more than 60 people across the country”. Following this revelation, it is suggestive that the South African Government has paid lip services to tackling the causes of this periodic Xenophobic Attacks whiles neglecting its legal responsibility of arresting and prosecuting perpetrators of such heinous act as well as compensating dead and living victims of such acts.

STRANEK-Africa is not oblivious of the fact that there is influx of drugs and human trafficking in South Africa, allegedly spearheaded by Foreign Nationals. Whiles the headline

points to Nigerians, they may not be the only foreign nationals as other nationals both within and outside Africa including indigenous South Africans may be complicit, exploiting such avenue for personal gains.

The Way Forward/Recommendations
Tackling unemployment of uneducated and unskilled South Africans - The African States have failed to deliver in the area of human development and equitable distribution of resources to bridge the poverty gap. In his last State of the Union Address in 2016, Former President Barack Obama reiterated the need for America not to only pride itself in its great education but also providing a sense of benefit and security for those who lose their jobs at a point in time in life. He points out that “Americans understand that at some point in their careers, in this new economy, they may have to re-tool and they may have to retrain”. Following this, we encourage the South African Government and all other African Governments to not only focus on helping the uneducated and unskilled South Africans to gain the needed education and skills but also focus on retooling South Africans and other African Nationals who have lost their jobs along their career or whose current skills is not much needed and gainful.

Pass local content laws – To preserve certain aspect of the economy for indigenous South Africans cast out of economic participation and to quench their anger against foreign nationals, STRANEK-Africa wishes to encourage the SA Government to quicken the passage of the “Township Economy Bill” which seeks to preserve key aspects of the South African Economy for locals and classified vulnerable indigenes, including but not limited to the informal sector (petty and retail businesses). However, the mere passage of these laws has proven not to be sufficient without strict enforcement thereof. A case in point is Section 27(1) of the Ghana Investments Trade and Promotion Centre (GIPC) Act 865 which states “a person who is not a citizen or enterprise which is not wholly owned by citizens shall not invest or participate in sale of goods or provision of service in a market, petty trading or hawking or selling of goods in a store”. The strict and nonenforcement of this act has resulted in periodic complaints and assault on particularly Nigerian, Lebanese and other nationals engaged in petty trading in Ghana. However, in the passage of these laws, a careful consideration must be given to the Africa Continental Free Trade Agreement and its clauses. On a more serious note, even though the South African High Commissioner to Ghana’s H. E. Amb Jeanette Ndhlovu comments sounds insensitive, lets reconsider her suggestion of African Governments creating more jobs to reduce the high rate of illegal migration.

sharing) between the Police and Immigration Services to fish out, prosecute (if necessary) and deport Foreign Nationals who have over-stayed their visas. This will help reduce the number of illegal immigrants engaged in petty and retail trading and illicit drugs.

Request for Police Report on the 2008, 2015 and 2019 Xenophobic Attacks – The African Union (AU), ECOWAS and African Countries whose Nationals fells victims to the previous and recent Xenophobic Attacks in South Africa, must request for police report/study of the 2008, 2015 and the recent (2019) Xenophobic attack detailing how the perpetrators were dealt with and the compensation packages for the victims living today and families of those who lost their lives. This report remains paramount to accessing the commitment and or how complicit the South African Government is, in embodying criminals and promoting the culture of impunity in Xenophobic Attacks against African Nationals. It is the position of STRANEK- Africa that, perpetrators of these act be treated as criminals and on individual basis. This recommendation stands on the shoulders of the Human Rights Watch World Report 2019.