Mahama Did Nothing For North, Ignore Him In 2020 – NPP Regional Chairman 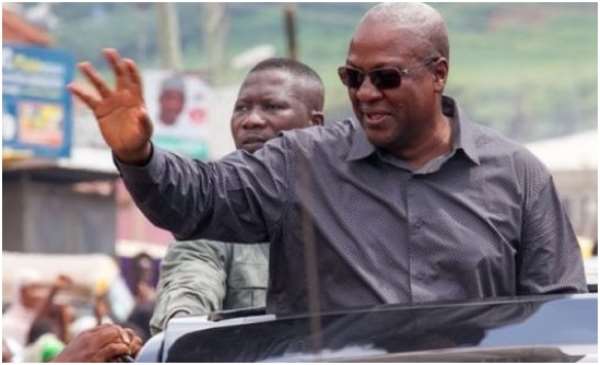 The Northern Regional Chairman of the New Patriotic Party (NPP), Alhaji Adam Samba has asked the five regions of the Northern Ghana to reject former President John Mahama and the National Democratic Congress (NDC) again in the 2020 election.

According to him, both John Mahama and the NDC have nothing new to offer Ghanaians.

Speaking to Citi News, Alhaji Samba maintained that bringing back the opposition party and its presidential candidate will spell doom for the country.

“The People in the Northern Region, can’t take him seriously. What has he done for the Northern Region since he became President? Absolutely nothing. The people thought the region will be his priority but he never did anything for them. So how can you take such a person seriously? So, I’m even surprised that he is going round wanting to come back as President. I were him, I wouldn’t be worrying myself to come back to the political scene.”

As the momentum for the next general elections builds up, both the governing NPP and opposition NDC have been attacking each other’s record.

Both parties have already been touting their achievements and trading ‘accusations’ just to get the attention of the Ghanaian voters.

While, the NPP is unfazed about the return of John Dramani Mahama as the NDC’s Presidential Candidate for the 2020 election, he says will be relentless in his efforts to win the 2020 elections on the ticket of the National Democratic Congress (NDC).

'Nothing can stop our march to Flagstaff House in 2020' – Mahama

Mahama has given assurances that his return will for the good of Ghana making promises that the citizens will witness more infrastructural development and and economic growth.

He believes, the NDC is ready to snatch power from the governing New Patriotic Party in the 2020 polls because the party is united and poised for victory, saying nothing can stop their victory.

President Nana Akufo-Addo is slowly gearing up for the election season with a prediction of a landslide victory for the New Patriotic Party (NPP) in the 2020 election.

Despite persistent complaints of hardship, the President believes the achievements of his government in the last two years are enough to secure the NPP another term in office.

He said, “I will ask for your continuous support for my party and for my government, for it is that support that strengthens me in the work I am doing. [For] the one million difference in 2016, we are going to increase it on the basis of the work that I am doing… All those who said that I would not be able or I could not fulfill my promises, I hope that one by one, they are seeing that they were wrong.”

President Akufo-Addo is however yet to declare any intent to run in for the presidency in 2020.