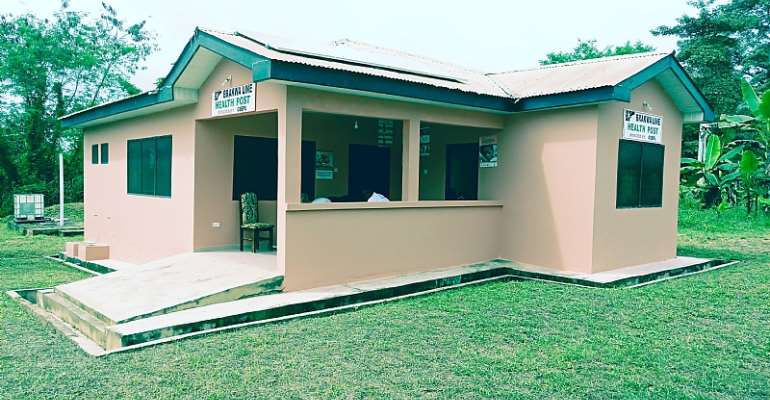 Health workers at the Brakwaline Clinic, a community near Bogoso in the Prestea Huni- Valley Municipality of the Western Region, have heaved a sigh of relief after the installation of a Solar Backup Generator at the facility.

The one-kilowatt solar power will light up the health facility and help in effective health delivery for the communities it serves, such as Bobirama, Nyamebekyere, Ebieni, Kroboline, Sekunde and Brakwaline itself.

The installation was made possible by the Golden Star Resources Bogoso/Prestea Mines 2018/2019 National Service Personnel (GSR-NSP).

As part of the policy by the mining company, it is expected of any national service group to identify a problem in any of the operational areas and provide a sustainable solution to it.

Speaking at the short ceremony held on Thursday September 5, at Brakwaline to outdoor the solar back up generator, President of the GSR-NSP 2018/2019 Joseph Kobby Mensah said, Brakwaline Clinic for the past years have had difficult times in providing health care, due to none-availability of proper power supply, hence the installation of the solar backup generator to facilitate their work.

“After considering so many projects, we found out that your health is your wealth and because they didn’t have light at the Clinic, the working hours were limited to only the day, which was worrying. But for the facility to be very effective, it needs to have power. Hence this installation” Kobby Mensah said.

Mr. Kobby Mensah later pleaded with the community members to assist in maintaining the backup generator for a longer lifespan.

On her part, the In Charge at the Brakwaline Clinic, Mrs. Abigail Kumi-Manu commended the GSR-NSP, for thinking about the residents of the communities, especially the pregnant women who mostly deliver at night.

She was optimistic, that the installation of the solar backup generator would ease the difficulties in delivering health care.

Mrs. Kumi-Manu said “We were using torchlight for delivery at night and that was very bad. Because we did not have light here too, we closed latest by 5 pm each day. With this power supply, we can also have a refrigerator here to preserve drugs”

Municipal Chief Executive for Prestea Huni Valley Municipality, Mozart Kweku Owuh, showed his gratitude to the GSR-NSP for exhibiting such problem-solving attitude. He urged them to continue with that positive attitude as individuals.

Prior to the installation at the Clinic, the GSR-NSP had registered 550 people in some of the company’s catchment areas, on to the National Health Insurance Scheme.

The two projects which cost them Ghc27,000 were funded by the GSR-NSP, individuals in the company and support from the mining company itself