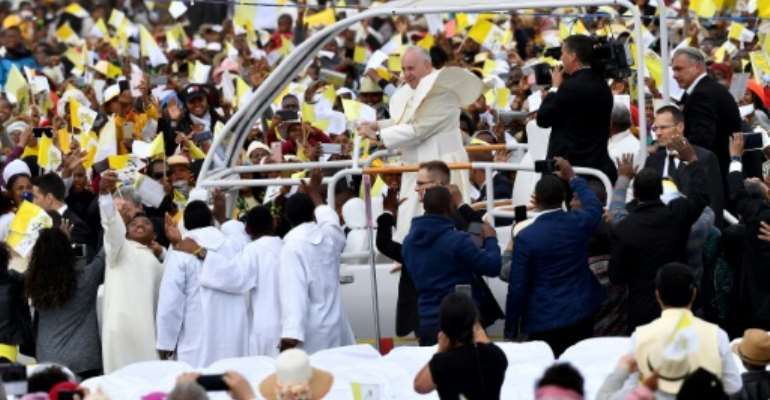 Thousands of people were gathering before dawn Sunday in the Madagascar capital Antananarivo, braving a cold windy morning to hear Pope Francis say mass on the second leg of his three-nation African tour.

In Andravoahangy church, pastor Jean-Yves Ravoajanahary briefed 5,000 people on the two-hour trek to Soamandrakizay stadium, where the mass will take place.

One by one the groups started the journey, huddled together and singing praise to the Virgin Mary. Traffic was gridlocked.

Hery Saholimanana left his house in the early hours with three family members.

The mass was due to begin at 10:00 am (0700 GMT). Organisers expect around one million attendees.

Many had already set up tents on the outskirts of the city on Friday, armed with posters of the Argentine pontiff.

"We are tired, but it's worth making all these sacrifices to see the pope with our own eyes and receive his blessing," he said.

Crowds gathered on Saturday to welcome the pope as he made his way to Soamandrakizay in his popemobile.

Thousands of young people -- mainly scouts -- gathered for a vigil there, waiting hours in the heat for Francis to arrive.

"I am here to ask for the pope's blessing to face the harsh realities of life, insecurity, poverty and corruption," said 17-year old student Njara Raherimana.

"All this gives me hope for change in my country," echoed fellow student, Antony Christian Tovonalintsoa, who lives on the outskirts of the capital.

During the vigil, Pope Francis lauded the "joy and enthusiasm" of the singing crowd.

The Pope presided over a vigil mass for young people on Saturday. By RIJASOLO (AFP)

He encouraged the youth not to fall into "bitterness" or to lose hope, even when they lacked the "necessary minimum" to get by and when "educational opportunities were insufficient".

Earlier on Saturday, Francis made an impassioned plea to Madagascans to protect the Indian Ocean's unique environment from "excessive deforestation".

Weeks after a spike in fires in the Amazon, the Argentine pontiff told his hosts they should "create jobs and money-making activities which respect the environment and help people escape poverty".

Madagascar -- famed for its immense diversity of flora and fauna -- is home to 25 million people, the vast majority of whom live in poverty on an income of less than two dollars a day.

More than half of its young people are out of work, even if many have good qualifications.

Francis visited Mozambique earlier in the week. He is also due to travel to the island of Mauritius.