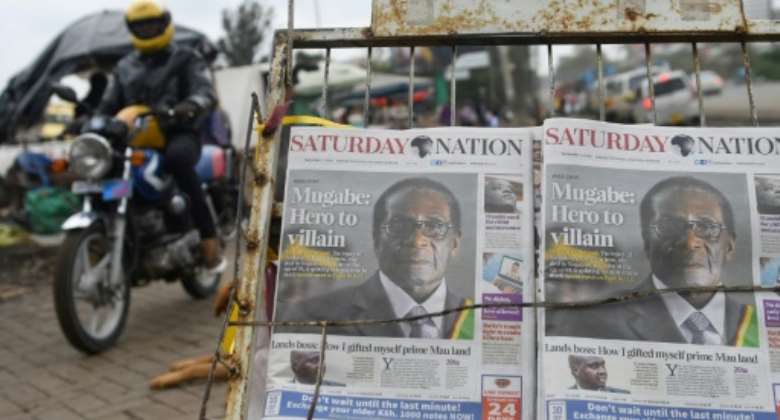 President Emmerson Mnangagwa announced a period of national mourning on Friday following the announcement of Mugabe's death in Singapore at the age of 95. By SIMON MAINA (AFP)

Flags flew at half mast in Harare on Saturday, but a day after former president Robert Mugabe's death many Zimbabweans preferred to work as usual than publicly mourn the independence hero turned despot.

President Emmerson Mnangagwa announced a period of national mourning on Friday following Mugabe's death in Singapore at the age of 95, two years after he was ousted after nearly four decades in power.

As many chose to criticise their former president or just carry on with their daily business, US Secretary of State Mike Pompeo slammed Mugabe, writing on Twitter that he had "devastated a country with enormous potential".

During his 37-year rule, Mugabe's increasingly tyrannical leadership and economic mismanagement prompted millions to leave the country. His regime was also widely accused of human rights violations and of rigging elections.

Only a handful of supporters came out onto the streets of Harare, sporting Mugabe-emblazoned T-shirts. By Jekesai NJIKIZANA (AFP)

Mugabe "catastrophically mismanaged the economy, turning the region's breadbasket into one where much of the population requires international food assistance," said Pompeo.

First heralded as a liberator who rid the former British colony Rhodesia of white minority rule, Mugabe used repression and fear to govern until he was finally pushed out by his previously loyal generals in November 2017.

"We are not mourning, why should we mourn when we are suffering like this," said Ozias Mupeti, 55, standing on a dusty curb in downtown Harare.

"Look at me selling pieces of ginger on the streets, at my age. I should have been an employer by now," he said.

Icecream seller Tendai Marange who has three children to feed, said she would mourn Mugabe, but later.

"When the body arrives we will stop. For now we have to work because life is tough these days," she said.

"We don't feel sorry for the old man," added a car rental employee who was afraid to give his name.

Only a handful of supporters came out onto the streets of Harare, sporting Mugabe-emblazoned T-shirts, as shops remained open and people went about their daily business.

"Mugabe provided education and scholarships to most Zimbabweans," said one supporter who gave his name as Comrade Bhobhi. "Of course he failed somewhere but on the education side he did great."

Another supporter, Patson Muparadzi, said he was raising money to travel to Zvimba -- Mugabe's rural home village -- where close relatives have gathered for a vigil.

The government is expected to announce when Mugabe's body will be returned to Zimbabwe and details of the funeral in coming days.

Mugabe, a former political prisoner and guerrilla leader, swept to power in 1980 elections after a growing insurgency and economic sanctions forced the Rhodesian government to the negotiating table.

But the Mugabe years are now widely remembered for his crushing of political dissent and policies that ruined the economy.

While China, Russia and South Africa among others lauded Mugabe as a "liberation leader", Britain said "Zimbabweans suffered for too long" under his "autocratic role".

Mugabe's initial success faded as he rapidly cracked down on his opponents. During the 1980s, he led an infamous campaign known as Gukurahundi during which an estimated 20,000 dissidents were killed.

The violent seizure of white-owned farms turned him into an international pariah -- although his status as a liberation hero still resonates strongly across Africa.

Mugabe died in Singapore where he was hospitalised in April. By Roslan RAHMAN (AFP)

Aimed largely at angry war veterans who threatened to destabilise his rule, the land reform policy wrecked the crucial agricultural sector, caused foreign investors to flee and plunged the country into economic misery.

As his health weakened, the military finally intervened to quash his second wife Grace's presidential ambitions in favour of their preferred candidate, Mnangagwa, Mugabe's vice president at the time.

Mnangagwa took over in November 2017 and was elected in July last year.