Rawlings Did Not Run a Corruption-Free Government 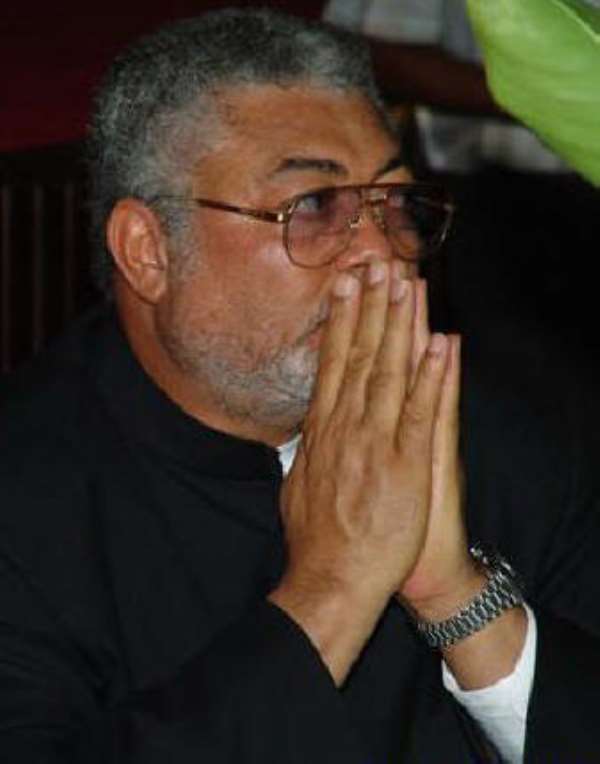 News that the Chief-of-Staff of President Addo Dankwa Akufo-Addo, namely, Mrs. Akosua Frema Osei Opare, has been donating considerably towards the charitable causes of former President Jerry John Rawlings may very well have remarkably contributed to the generally diplomatic and quiet attitude of Mr. Rawlings towards some of the perceived lapses of the Akufo-Addo Administration is very doubtful, to say the least (See “Rawlings Confirms Receiving Goodies from Presidency” HeraldGhana.com / Ghanaweb.com 8/26/19). It is doubtful whether his apparently diplomatically measured or generally mild and moderate attitude towards the Akufo-Addo-led government of the New Patriotic Party (NPP) has been primarily tempered by any donations that Mrs. Osei Opare may be making towards the charitable causes of the Founding-Father of the main opposition National Democratic Congress (NDC).

Indeed, the primary reason for Chairman Rawlings’ generally reticent attitude towards the Akufo-Addo Administration very likely stems from the fact that plausibly perceived rank corruption and all, it can scarcely be gainsaid that, on the whole, Nana Akufo-Addo can be clearly seen to be doing far more, and constructively so, to remarkably reduce the level of corruption in the country, particularly at the official level, without resorting to the “revolutionary” use of physical violence to achieve the same. Which, of course, in absolutely no way is to say that the present level of official corruption in the country is anywhere near a level that is either tolerable or acceptable. To be certain, anybody who lived in Ghana or studiously followed all four-and-half years of the Mahama tenure is fully cognizant of the scandalous and incontrovertible fact that the Mahama regime avidly thrived on rank corruption. It was almost as if corruption and rank official theft were the very oxygen on which the Mahama regime’s operatives thrived, a dire absence of which would have effectively collapsed the Mahama-led government of the National Democratic Congress.

And here, of course, one cannot forget the sort of tribal-nepotism that characterized SADA – the so-called Savannah Accelerated Development Authority – whose executive membership criteria clearly appeared to be predicated on the prospective member’s exclusive northern-ethnic descent, rather than demonstrable managerial experience or professional qualifications. We also had the GUBAH and ASONGTABA rackets in which Mahama tribesmen and women hugely profited at the expense of the Ghanaian taxpayer. Indeed, the insufferable arrogance of former President John Dramani Mahama, which found disturbing public expression in his pontifical edict that other than Former Presidents Jerry John Rawlings and John Agyekum-Kufuor, absolutely no other Ghanaian citizens, especially then Candidates Akufo-Addo and Mahamudu Bawumia, had the right to impugn the performance track-record of a grossly incompetent Mr. Mahama and his double-salary-drawing cabinet and executive appointees.

With Nana Akufo-Addo, it is quite obvious that the problem of corruption is largely one of poor monitoring and evaluation of executive operatives, and the imperative need for both Messrs. Akufo-Addo and Bawumia to spend more time at home and on the ground, in order to ensure that their appointees are hard at work and not simply and primarily lining their pockets, wallets and bank accounts with taxpayer money. On the other hand, Mr. Mahama actually facilitated executive grand theft, such as was recently revealed by Mr. Thomas Kusi Boafo, the Akufo-Addo-appointed Minister for Public Sector Reform, involving the importation of expensive vehicles from Dubai and other Gulf-State countries, and the resale of the same at between 2- to 10-percent of their original prices, within 6 months of the importation of these vehicles, oftentimes to the very same companies that originally imported these vehicles for resale at heavily re-inflated prices, with the ultimate objective of divvying up the “profits” made between operatives of the Mahama Flagstaff House and the racketeering automobile dealerships.

This is the sort of “Ajanguda” political climate and culture that the former Atta-Mills’ arch-lieutenant would have Ghanaians returned to by casting a suicidal ballot in the 2020 general election. God Forbid!