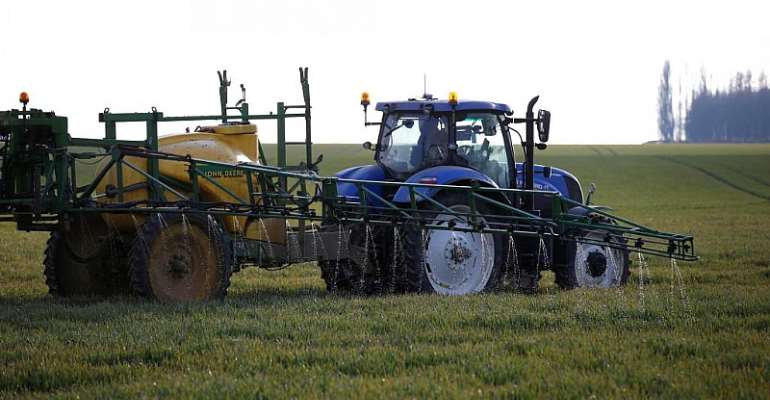 The French government is ready to intriduce fixing a 5m or 10m pesticide-free buffer zone around housing areas, after several local mayors defied the government by banning weed killers like glyphosate in their towns. But environmentalists say such distances fall short of the mark.

The recommendations, in line with those of the French agency for food, environmental, occupational health and safety (Anses), will depend on the crops concerned. Low crops such as vegetables could be subject to a buffer zone of 5 metres, with 10 metres for higher crops such as cereals.

The proposed legislation follows growing concerns over the impact pesticide use can have on human health.

In late August, Environment Minister Elisabeth Borne said there "had to be a minimum distance between residential areas and pesticide spraying".

10m buffer zone 'really insufficient'
Environmentalists say the proposed 5m or 10m buffer zone is inadequate and took to the streets on Saturday to voice their concern.

France had promised to outlaw the use of glyphosate by 2021 but President Macron has since admitted this is impossible. Nonetheless many farmers are nervous about the introduction of pesticide-free buffer zones.

Leroux said while FNE had anticipated "heavy lobbying" from the farming sector it was "disappointing to see...that the minister of agriculture appears to count more than health and environmental concerns".

“It must be an April Fools", Yann Arthus-Bertrand, president of the Good Planet foundation, told BFMTV.

“I can't believe that lobbyists have more weight than public health concerns. It's insulting for people who are have been fighting for so long against the use of pesticides.”

However, David Cormand, secretary of the Green party EELV, recognised the government's decision to introduce a buffer zone was "historic".

“It's the first time France has admitted people are endangered," by crop spraying he told BFMTV. "But the problem is the anecdotal aspect of this decision: a buffer zone of five to 10 metres doesn't mean anything."

Mayors go on crusade
France has banned the use of glyphosate and other commercial pesticides in public spaces like parks since January 2017, and earlier this year it was extended to include private residences and gardens.

This latest government initiative comes after dozens of French mayors took the initiative to ban pesticides near populated areas in their towns and villages.

In one highly-publicised case, Daniel Cueff, mayor of Langoulet in Brittany, banned the spraying of pesticides within 150 metres of residential housing in his village.

“It is legitimate for a mayor to take action when there is incompetence by the state,” he said, referring to the 2009 European Union directive that requires member states “to take steps to protect residents from pesticides".

But on 28 August, an administrative court in Rennes, western France, ruled he had overstepped his authority and his ban was overturned.

On France 3 Bretagne television Cueff said he would appeal the ruling and would call on several other mayors to impose similar bans.

Around 40 local officials have indeed imposed similar pesticide buffer-zones in towns and villages across France since the beginning of September.

“150 metres is out of the question,” he told Europe 1 radio, warning that the introduction of such limits would reduce farmland for food production so much that the French “would be forced to get food elsewhere”.

The government is expected to decide on the final length of the buffer zones in October or November.