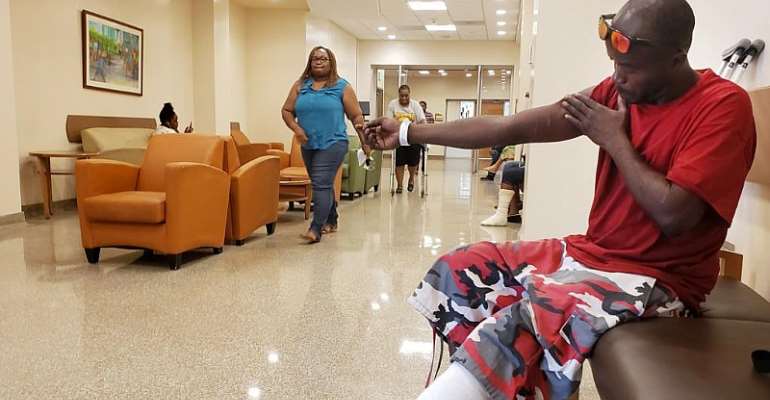 Hundreds of people have managed to escape the catastrophic aftermath of Hurricane Dorian and aid relief is now being organised in the capital, Nassau. But thousands are still awaiting evacuation from the devastated islands of Great Abaco and Grand Bahama.

The most powerful hurricane on record to hit the Bahamas tore through the islands a week ago, levelling some neighbourhoods and swallowing others with storm surge.

The official death toll now stands at 43. Eight people were confirmed dead from the storm in Grand Bahama and 35 people in the Abocos Islands, according to local media.

But thousands of the country's 400,000 people are still unaccounted for.

On Friday, Bahamas Health Minister Duane Sands suggested that the death toll would rise, describing the devastation across the islands as "staggering."

Evacuation
Humanitarian aid efforts are now under way and many survivors are desperate to evacuate, particularly from Great Abaco and Grand Bahama, two of the worst-hit islands.

On Friday, thousands gathered at ports.
"Nobody can help anybody in Abaco, there's no place safe, everything is destroyed," Firstina Swain, 75, told Reuters news agency. "The people of Abaco need to get out, there are too many dead bodies."

In Freeport, witnesses said thousands crowded the port to try to get on a Bahamas Paradise Cruise Line ship offering free passage to Florida to those who had the necessary US immigration documentation.

A boat with 250 evacuees left Abaco and arrived in Nassau, the capital of the Bahamas and which was less affected by the storm.

National Voice of the Bahamas radio reported that another boat with hundreds aboard was on its way.

Approximately 200 people were also evacuated from Abaco Friday on Bahamasair flights, according to a NEMA spokesperson who declined to be named.

Frustrations
"Free air evacuations on Bahamasair from Abaco started (Thursday) and will continue until all Grand Bahama and Abaco residents who want to leave are off the islands," Prime Minister Hubert Minnis said in a tweet.

But some are frustrated over the way the evacuations are being handled.

Four survivors told Reuters they had been charged $75 for a seat on a Bahamasair flight from Abaco to Nassau. "I thought a relief flight would be free," said Anthony Thompson, 27, who said he paid the fare for himself, his wife and his sister. "I thought wrong."

A Bahamasair official, who requested anonymity, told Reuters the airline was collecting its customers whose flights had been cancelled during the hurricane. To the extent extra seats were available, it was offering to ferry others off Abaco "at cost," the official said.

'Staggering' death toll
The medical chief of staff at Princess Margaret Hospital in Nassau said two refrigerated, 40-foot trucks would be needed to hold the "staggering" number of bodies that were expected to be found.

Those injured by the storm, which at one point was a Category 5 hurricane on the five-step Saffir-Simpson scale of intensity, were treated for fractures, head injuries, lacerations, skin rashes and dehydration.

Aid efforts
Relief groups are focusing on getting doctors, nurses and medical supplies into the hardest-hit areas and helping survivors get food and safe drinking water.

The United Nations estimates 70,000 people are in "immediate need of life-saving assistance" such as food, water and shelter. It has released €906,000 from its World Food Programme emergency fund to provide aid to the victims.

The EU said it would send €500,000 as initial emergency relief for those lacking shelter, food and water.

Now a category one hurricane, Dorian is currently moving along the Atlantic coast of North America towards Nova Scotia at a speed of 41 km/h.