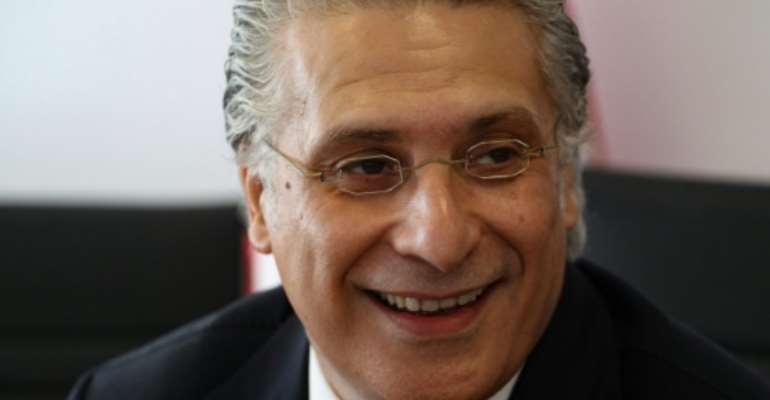 Tunisian presidential candidate Nabil Karoui is continuing his campaign, despite being behind bars on money laundering charges. By Hasna (AFP/File)

Arrested just weeks before Tunisia's September 15 presidential polls, candidate Nabil Karoui has hit the campaign trail by proxy, deploying his wife and party activists to shake the hands he cannot.

"He's not with us today, but he's in all our hearts," his wife Salwa Smaoui told a packed house at a Monday night rally, the media mogul's first since he was detained on August 23 on money laundering charges.

Smaoui does not hold an official position in Karoui's Heart of Tunisia party, founded just months ago, but she received a thunderous welcome from the crowd in her hometown of Gafsa, a central mining area.

"We're going to celebrate, but there's a little sadness because Nabil should be here, not me," she said.

On Tuesday, Tunisia's judiciary rejected an appeal to release Karoui, but he remains a candidate in the polls called after the July death of Beji Caid Essebsi -- Tunisia's first president to be democratically elected in a nationwide vote.

Karoui is behind bars at Mornaguia prison, some 20 kilometres (12 miles) from the capital Tunis, but his campaign team is free to travel the country and fire out social media blasts on his behalf.

In front of the 2,000-strong crowd in Gafsa, a party official read out a letter Karoui wrote from prison, calling on voters to "make a ballot box revolution" and to "return Tunisia to the people".

Heart of Tunisia leaders laid out the party's programme at a recent Tunis press conference, placing "the battles against poverty and unemployment" at the top of its agenda.

Karoui's lawyers claim that preventing him from campaigning like the other hopefuls is unfair, with one calling his client a "political prisoner".

The media magnate will most likely be forced to sit out the three-day televised presidential debate that kicks off Saturday.

But he's not the only candidate who will be absent. Slim Riahi, a politician and businessman wanted for money laundering, has been in exile since late 2018.

But that hasn't stopped Riahi, the former head of one of the country's leading football clubs, from launching a media campaign from abroad.

Riahi was even beamed in via hologram to launch his new political party in August.

Karoui and his brother Ghazi have been under investigation since 2017 after anti-corruption watchdog I-Watch submitted a dossier accusing him of tax fraud.

He was indicted in early July and later arrested by plain-clothes police officers just weeks before the first round of the presidential poll.

The arrest sparked anger among his supporters, who accuse Karoui's rival Prime Minister Youssef Chahed of orchestrating his jailing.

Karoui's popularity has largely been built on the back of charity projects broadcast daily on his Nessma TV channel, which authorities have banned from covering the presidential campaigns.

He was nearly removed from the race in June when parliament passed an amended electoral code that would bar any candidate who handed out "favours in cash or in kind" in the lead-up to the vote.

But Essebsi never enacted the bill, leaving the door open for Karoui to run.

Tunisia's election commission has since confirmed Karoui remains a candidate, even from behind bars.

And while the body has banned the publication of polls, studies say the media mogul's arrest has boosted his popularity.

But it is unclear whether that surge of sympathy will translate into ballot box support.

Observers say that if Karoui makes it to the second round of voting, it will be hard for authorities to justify keeping him behind bars without a trial.