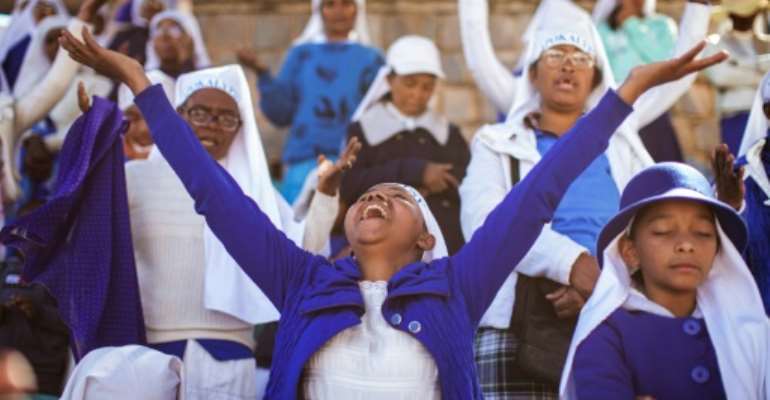 The Apocalypse Church in Madagascar has won many poor converts. By GIANLUIGI GUERCIA (AFP)

Pope Francis, visiting Madagascar on his three-nation African tour, finds himself in a country where Catholicism remains strong but faces a rising challenge from evangelical Protestantism.

Two such evangelical recruits are Lova Nirina Raveloarisoa, 45, and her friend Pascaline Raharimalala, 34.

The pair, raised as Catholics, broke with their childhood faith a few years ago to don the blue tunic and white headdress of the Apocalypse Church of Madagascar.

Created just 23 years ago, the Church -- its aim: "To preach the Book of Revelation" -- has a passionate following, driven by its founder, Andre Mailhol, a former street trader.

"The Apocalypse Church saved me. My pains are no more," says Raveloarisoa, 45. 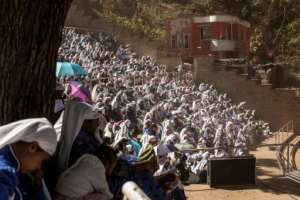 "The Apocalypse helped me after my son died," says Raharimalala.

The pair were among hundreds of women one recent Sunday at an amphitheatre in the capital Antananarivo which hosted a seminar for women, organised by Mailhol's wife, Aurella Mailhol.

The blue-and-white colours of the throng "were revealed to us by God," says Pastor Mailhol, 59, wearing an immaculate suit and gleaming shoes.

A huge island perhaps best known in the world for its astonishing tropical forests, Madagascar is also fertile ground for religions, new and old.

"In 1991, I received a call from God to become the messenger of the Book of the Apocalypse," Mailhol says. He is a former Catholic, while the Church's website also says he is a former Adventist.

Those figures are impossible to verify, but anecdotal evidence does point to a strong following.

Mailhol ran in last year's election, and his campaign stop in Antananarivo brought 60,000 people to a sports stadium -- although he did less well on polling day, picking up only 63,000 votes, or 1.27 percent of the total. 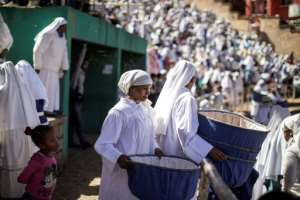 The seminar on Sunday is devoted to the education of women, and many of the faithful take notes, like studious pupils.

Warnings and advice come thick and fast: "In nightclubs, devils plant the seeds of discord," "Be vigilant about coffee, it causes sicknesses like shaking," "It's not enough to forbid a child from using a knife, you have to explain to him why."

Three hours later, the lessons give way to a show -- and then the appeal for cash.

"We are going to do a few offerings, because renting this amphitheatre isn't free," Aurella Mailhol says.

"You shouldn't present yourself before God with empty hands."

Raveloarisoa, a seamstress, and Raharimalala, a trader, obey. Each month, they give the Church at least a tenth of their income.

"Tithing is written in the Bible. With it, you can expect the blessing of God. In return, you will get as much as you give." She earns the equivalent of $138 (125 euros) per month.

The Church is also seeking funds to building a huge church -- capacity 30,000 -- for which groundwork is already under way in a suburb of Antananarivo. 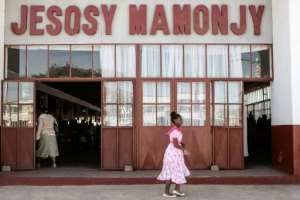 "It was a message from God I received in 2004," he recounts. "Build the biggest church in Africa."

Tithing, he insists, is voluntary and not exploitation.

"People receive God's blessing. They pay 20 percent of their income to the state in the form of taxes, and what do they get in return? Poverty."

At the end of his sermon, the faithful come forward for the blessing of holy water and for the pastor to lay his hands on the sick. A mother presents her two children, both of whom have malaria.

"God is a medicine for those who have faith," says Mailhol, who acknowledges however that he had had his children vaccinated. "Thanks to prayers, many women have been cured of breast cancer."

In Madagascar's Catholic Church, the response to the challenge posed by the evangelists is outwardly calm.

"Catholic churches are still full," said the archbishop of Antananarivo, Odon Arsene Razanakolona, while admitting to certain "shortcomings" including the "rather austere liturgy".

Catholicism is the majority religion in Madagascar, a former French colony that is home to around 25 million people. The Church is also a safety net for many poor people, running programmes for the needy as well as schools and hospitals.

But Paul Rabary, who teaches political sociology in the city's university, said the mental stress of poverty in Madagascar was dire, and evangelical churches helped to ease it.

"Given the poverty, the need to be psychologically reassured, (these churches) perfectly meet the needs of the faithful," Rabary said. "Traditional churches promise paradise in the hereafter. Churches of spiritual awakening promise it immediately."