Afrima Says No To Xenophobia In Africa

....Lack Of Education, Preventable Diseases, And Extreme Poverty Are The Enemies Of Africa
....Calls For Peace
By AFRIMA AWARDS 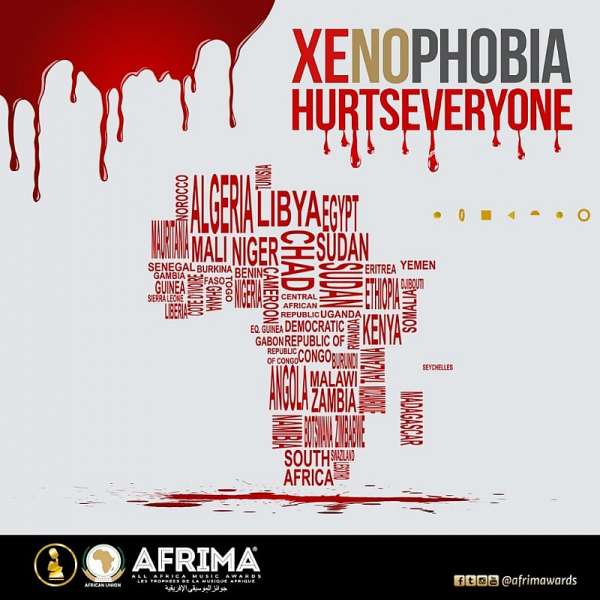 The International Committee of the All Africa Music Awards, AFRIMA, is extremely saddened by occurrences of barbaric xenophobic attacks on other Africans living in some parts of South Africa as widely reported in the media since Monday, September 2.

The International Committee also unequivocally condemns the reverberating reprisal attacks in some countries in Africa such as Nigeria and Zambia. The scourge of xenophobia in its entirety is a cancerous threat to Africa's unity, peaceful co-existence and economic growth that AFRIMA is known to have championed for years through the instrumentality of culture and music.

Speaking of behalf of the International Committee of AFRIMA, the President and Executive Producer of AFRIMA, Mike Dada, expressed displeasure and disappointment over the widespread, calculated violence, hate and xenophobia on African migrants in Africa. "While we view these unfortunate attacks and counter-attacks on fellow Africans as by-products of anti-poor policies of most successive governments in Africa which create huge inequalities and lack of opportunities for millions of young people on the continent, Africans should note that the myriads of common problems of joblessness, diseases, hunger, lack of quality education, extreme poverty, homelessness and lack of access to finance are the true enemies of Africa that can only be defeated only if there is a united, collaborative and peaceful Africa".

"The bigger picture by AFRIMA is to see a borderless continent where individuals live freely, trade and coexist in unity and leverage on one of the most powerful tools that bind us together which is music" Mr. Dada added.

AFRIMA, in partnership with African Union Commission, AUC is committed to achieving the AU Charter objective of promoting social integration in the five regions of Africa, while recognising and rewarding the work and talent of a myriad of the artiste in the African music and cultural industry.

AFRIMA calls on political leaders, business leaders, traditional leaders, artistes, players in the creative industries and people of good conscience in Africa to condemn this act of hate and needless xenophobia, embrace and propagate peace and harmony through their actions and utterances on this volatile issue. This cycle of violence must stop for us to move forward as a people.

The All Africa Music Awards is a youth-focused music property that celebrates Africa, recognizes and rewards the work and talents of a myriad of African artists across generations. AFRIMA is committed to the stimulation of conversations among Africans and between Africa and the rest of the world about the potentials of the cultural and creative economy for real enterprise on the continent, contributing significantly to social cohesion and continental integration as well as sustainable economic growth and development in Africa by lending its voice to promotion of education and campaign against extreme poverty and preventable diseases.