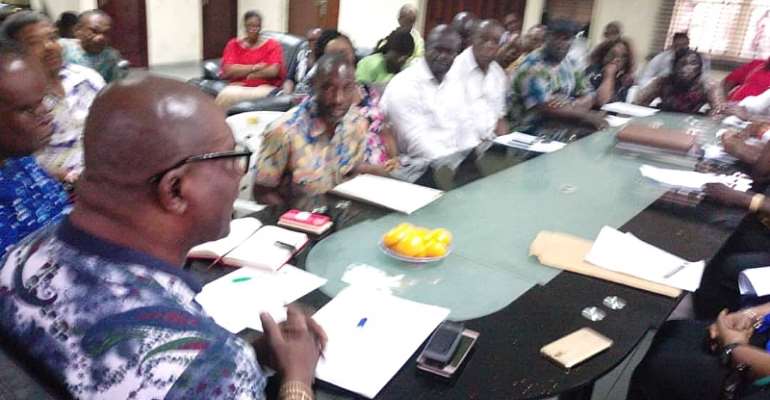 The Sole Administrator of Rivers State Waste Management Agency (RIWAMA), Bro Felix Obuah has charged workers of the Agency under the umbrellas of Amalgamated Union of Public Corporation, Civil Servants and Recreational Technical Union, Senior Staff Association and Medical and Health workers to show more commitment to their work to justify the regular payment of salaries by the State Governor, Nyesom Ezenwo Wike.

Bro Obuah made the charge when the RIWAMA chapter executives of the three unions paid him a courtesy visit in his office on Thursday, September 5, 2019.

The Sole Administrator who described the relationship between workers and government as a collective bargain said while it’s incumbent on government to provide the enabling environment, the workers must of necessity play by the rules and key into government programmes for the overall good of society.

Bro Obuah however, frowned at the lukewarm attitude of some workers whose main concern and interest is to collect salaries and allowances without a corresponding service rendered, calling it retrogressive and unpatriotic.

He urged the union leaders to live by example and ensure that their members imbibe the culture of hard work, commitment to duty and honesty so that society will be better for all.

Bro Obuah also harped on the need for the workers to key into the Agency’s efforts to keep the State, their offices and surroundings clean in line with the sanitation laws of the State and support Governor Nyesom Wike in his unprecedented efforts to restore Port Harcourt to its former Garden City status.

Earlier, in their separate speeches, the Chairperson, Medical and Health Workers Union, Comrade Wobo Victoria Nkima, chairperson, Senior Staff Association, Comrade Edna Obele-chu and Chairman, Amalgamated Union and Public Corporation, Civil Servants and Recreational Union Workers, Comrade Emmanuel Nyewene said they decided to visit the RIWAMA Sole Administrator, Bro Felix Obuah to appreciate him for the good work he is doing and lauded him for ensuring that the Agency lives up to its responsibility to promote a clean and sustained healthy Rivers State.