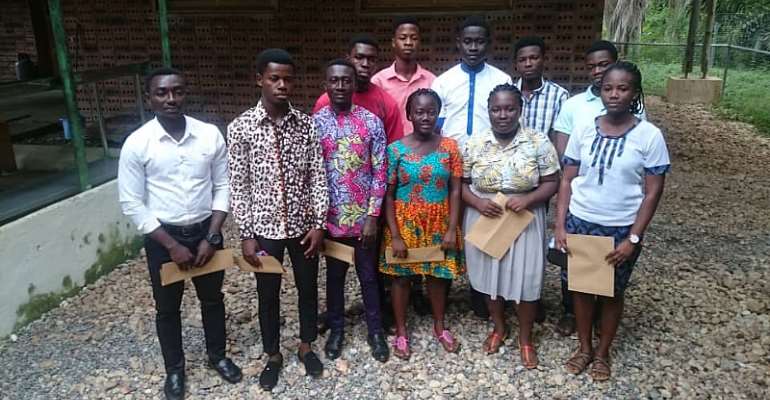 Some thirteen (13) rural students in the Kwaebibirem municipality has been awarded scholarship to pursue various courses in public tertiary institutions in Ghana this year by Serendipalm Foundation and the Fair-Trade Committee of the Serendipalm Company Limited in Akyem Asuom.

The students would study courses such as agriculture, engineering, medicine, sociology and other social sciences in the tertiary institutions.

Chairman of the Serendipalm Foundation, Mr. Acquaye Lawrence announced this at a short ceremony to present the scholarship to the beneficiaries in Akyem Asuom. He noted that four students are already benefiting from the scholarship scheme and are performing well in their academics with the support.

This is an effort to support brilliant but needy students in and around Akyem Asuom to have access to tertiary level education which otherwise could not have been afforded by their parents. Serendiplam expects all the students to take their academic work seriously, become responsible members of their communities and ultimately contribute their quota towards the development.

He stated that Serendipalm derives its satisfaction from supporting rural-folks in diverse ways that impacts their lives and their communities.

The award of the scholarship, he said, showed the commitment of the company to develop the human resources of the rural area and believe this would go a long way to strengthen the community development. He urged the awardees to study hard, observe the laws and regulations of the various institutions they are attending and serve as ambassadors of the foundation.

Mr. Anokye Emmanuel, the Scholarship Committee Chairman, entreated the awardees, parents and the community to embrace the scholarship programme and explore every opportunity to develop their communities. To the awardees, he urged them to study hard and be of good conduct on their various campuses and return home with good academic results. He also advised the parents of the awardees to play their role in their wards education and making it a success.

Speaking at gathering, Mr. Dickson Wenyonu, the Chairman of the Fair-Trade Committee admonished the awardees to take their studies seriously in order to realize the dream the scholarship scheme is instituted for. “There is the tendency for you to relax with your studies since you think the money is not coming directly from your parents. It is money that has been realized as a result of toil of farmers, some of who are your parents and relatives. So please study hard and make us all proud” – he told the awardees.

One of the awardee, Miss Akowuah Mercy, a student of the University of Ghana, on behalf of her colleagues thanked the Serendipalm Foundation for the opportunity given to them acquire a tertiary education which could have not been a reality to some of them. “On behalf of my colleagues we are very glad for this opportunity and promised to make good use of it and come back to help build sustainable future for the generations of our communities and it is a great offer for some of us,” she explained.

She pledge that they will observe all the laws, rules and regulations governing their various institutions.

Parents of the awardees could not hide their joy on this great opportunity, Mrs. Judith Amoako of Akyem Asuom expressed her much appreciation to the foundation for the kind gesture and the positive impact they are making in the communities. “This is an opportunity to help reduce the financial constraints on us to afford a university education for our wards and as a parent I am very happy and encourage all other parents here to play their best roles to see the students through their education,” Mrs. Amoako expressed.

The Serednipalm Foundation is a charitable unit of the Serendipam Company Limited in Akyem Asuom mostly responsible for the execution of community development project in these rural areas of the Kwaebibirem municipality of the Eastern region, Ghana.