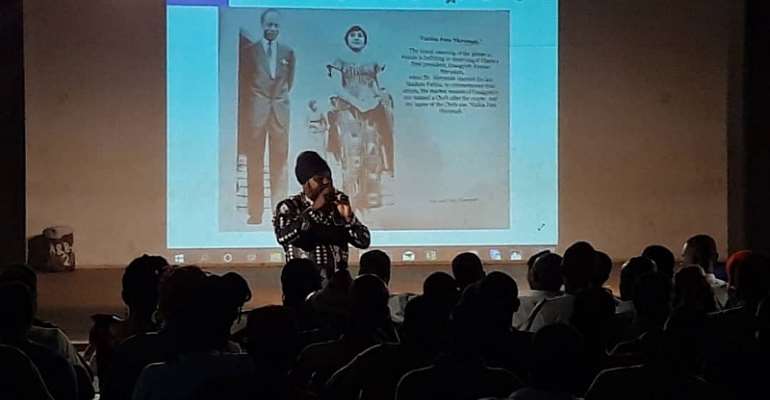 Pan Africanist lecturer and radio personality, last Saturday, kept people sitting at the edge of their seats and cold-sweating when he unleashed his third lecture titled KWAME NKRUMAH AND TGE ALADDIN LAMP at the University of Ghana, Legon.

The mammoth crowd welcomed Blakk Rasta at exactly 7pm as advertised as he opened his set with Bamaya dancing. He then launched into the topic for the day.

He delved deep into the life of the Osagyefo and revealed such serious, hidden facts of the African hero drawing ideas from a wide spectrum of archival materials and oral history. Blakk Rasta revealed that Nkrumah used the name Ghana first in the country's history in 1949 when he named the Ghana National College after Ghana just after the Accra riots. He wondered how J.B. Danquah is credited as being the one who gave the country its name just before independence in 1957 when Nkrumah broke away from the UGCC juster after the Accra riots of 28th February 1948.

Blakk Rasta also touched on the conspiracies to kill Nkrumah by the CIA et cetera. He opined that, had it not been the coup of 1966, Ghana would have been at par with British given that Britain and Ghana had their first stretch of motorways/highways almost at the same time and how Ghana was fast becoming the icon of Africa to the envy of Britain and America.

Blakk Rasta opined that Africa was over 1000 years ahead of Rome and Greece as signified by the city of Memphis which was built 3000BC which could only be fairly attempted by the Romans in 2000BC and Athens in 1800BC.

The explanation was deep and accurate and keep some of the professors at the lecture intrigued. Several African American scholars were also present and they applauded incessantly. Nkrumah was well-resurrected on Saturday nite as a few people shed tears at our betrayal of such a visionary.