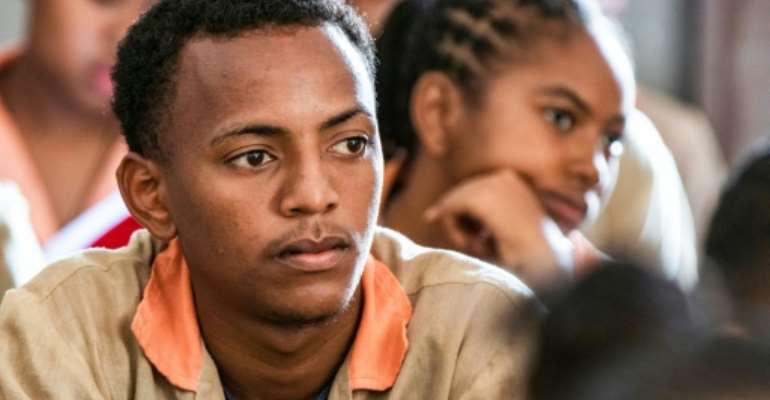 The bell of St. John's Catholic high school, next to the cathedral in Antsiranana in northern Madagascar, sounds for the noon break, and hundreds of students pour into the street.

Among them is Michael Beafara. With his schoolbag on his back, he hails a tuk-tuk taxi, for there is no time to lose -- it is Friday, and he needs to get to the mosque for midday prayers.

En route, he will stop off at home to swap his khaki school shirt, which has the cross emblazoned on the breast, for an ochre djellaba.

"I try to go to the mosque on Fridays and at the weekend," says the 16-year-old Muslim, who has been enrolled in Catholic schools since primary education.

The arrangement may raise eyebrows in other countries, especially where religious friction is high.

Not so in Madagascar, an island nation whose traditions of religious tolerance will this week be on display for Pope Francis, who arrives on Friday for the second leg of a three-nation African tour.

At Beafara's school, run by the Daughters of Mary, nearly one in eight of pupils are Muslim.

At Saint Joseph high school, also in Antsiranana, Muslims account for more than one in five of the enrolment, whereas they account for less than 10 percent of Madagascar's overall population.

As in other poor countries, Catholic education is prized by many families, who cite discipline, quality teaching and access to a social network as among its prime advantages.

In 2017, students at Catholic schools in Madagascar notched up a 63-percent success rate for the baccalaureat -- the all-important school-leaving exam, which is modelled on the famous French "bac".

Time for prayers: Beafara, clad in a djellaba, uses the school midday break to worship at a local mosque. By Fita Fanomezantsoa (AFP)

In contrast, only 38 percent of students succeeded in the baccalaureat at state schools. Eleven percent of school students overall are enrolled in Catholic schools.

Parents of Muslim children told AFP that they were unbothered by the religious component of education in Catholic schools, which includes a commitment by pupils to learn the Christian catechism and follow classes in Christian morality entitled "Education about life and love".

"There are so many common areas between Islam and Catholicism," said Michael.

"Whether you are a Catholic or Muslim, we all pray to the same God," said his father, Leonce Beafara, a former civil servant who grew up in a Christian household but married a Muslim.

Mixed backgrounds such as this are common northern Madagascar, which has the largest concentrations of Muslims in the country.

The success comes with a price -- school fees range up to 60,000 ariary ($17, 15 euros) per month per child, which can be a heavy burden in a country where two-thirds of people survive on less than $2 per day. State education is free.

Back to school: Beafara returns to St. John's for classes. By Fita Fanomezantsoa (AFP)

Michael greets his friends with a hearty Islamic salutation, "As-salaam-alaikum" (Peace be unto you).

He has had enough time to get back into his school blouse with the cross on it -- only Catholic symbols are permitted in the school. At the entrance, there is a statue of the Virgin Mary, and there are crucifixes in every classroom.

Many students questioned by AFP said they were surprised that religious cohabitation should even be considered an issue.

"It's completely normal," said Izad Assouman, 18. "We are equal, we respect each other," said Michael, who has permission to take time out of school during Ramadan to prayer at the mosque.

The students said they approved a recent decision by President Andry Rajoelina to name Aid el-Fitr -- the end of Ramadan -- as a public holiday, alongside Christian holidays.

"Muslim pals invite me sometimes to come over for the end of Ramadan," said Frederic Robinson, a Catholic student.

Sister Marie Theodosie, who is the bookkeeper at St. John's, said peaceful coexistence is rooted in the region's traditions and similar lifestyles. Many families eschew pork and women of both religions favour long, conservative gowns.

The school's youthful computer science teacher, Soafa Jaoriky, is a Muslim but says with a little laugh that she knows the Catholic prayers.

A Catholic nun teaches at a class at St. John's high school. Many Muslim parents in Madagascar speak highly of the quality of education in Catholic schools and say they are unfazed by the Christian component of the curriculum. By Fita Fanomezantsoa (AFP)

"When I was I child I forced my (Muslim) mother to learn them so that she could teach them to me."

Facilitating enrolment by Muslims, Catholic schools in Antsiranana do not request a certificate of baptism from new students -- unlike many schools in the capital Antananarivo, where Muslim students are less numerous.

Tolerance and cohabitation are one thing, but religious conversions are rare, according to Father Gidlin Bezamany, in charge of the Catholic schools in Antsiranana.

Catholic schools "are not there for proselytising," he said.