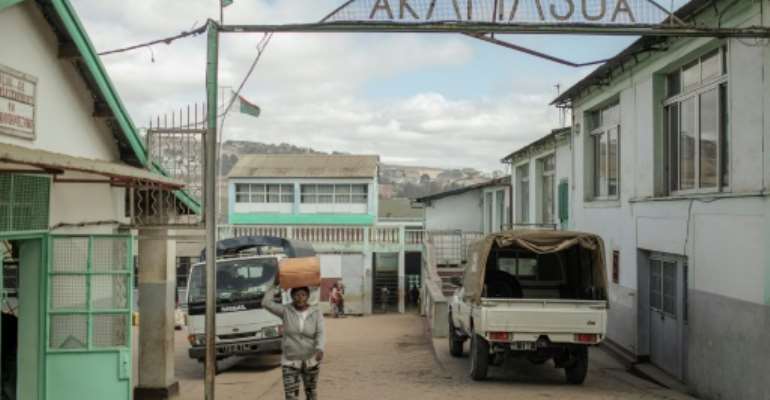 Hope from despair: The town built on rubbish. By GIANLUIGI GUERCIA (AFP)

When he was six, Liva spent his days rummaging around an enormous landfill overlooking the hills of Madagascar's capital Antananarivo.

"You couldn't tell the humans from the pigs and dogs," he recalled.

He says he owes his salvation to Father Pedro -- a beloved Catholic figure who has helped to lift thousands of Malagasy out of misery.

Fr. Pedro's association, Akamasoa, has constructed a town on a rubbish dump, making it a sanctuary, and built dozens of schools in neglected villages, providing education for children.

Children and waste pickers sift through garbage at a landfill near 'Cite Akamasoa' - 'Akamasoa Town'. By GIANLUIGI GUERCIA (AFP)

Pope Francis -- who is touring Madagascar this week as part of his second trip to sub-Saharan Africa -- is expected to stop at the town on Sunday as part of his visit.

The town it built on landfill on the outskirts of the capital Antananarivo has grown into a home, which locals dub "Cite Akamasoa," for more than 25,000 people. Its small pastel houses seem drawn from a fairy tale.

"Under my feet used to be the dump," he said, walking along a neatly paved street lined with jacaranda trees.

But stench and flies are a staunch reminder of the rubbish piled up nearby, which is many metres (feet) thick.

Liva could by now have left, but he chose to stay and "give Akamasoa back what it gave me."

Father Pedro Opeka: People at Akamasoa call him 'Our saviour,' or 'The arm of God'. By GIANLUIGI GUERCIA (AFP)

"These are people that no one would even acknowledge and who have regained their dignity," said Pedro, an Argentinian priest who has lived in Madagascar for over 40 years.

"We gave them a roof, an education, a job (and) this hell became an oasis of hope."

Aged 71, with a snowy beard and sparkly blue eyes, he is constantly tailed by a cloud of children. Adults drop by to touch him and say hello.

"(Father Pedro) picked us from the street. He is our Saviour," said Mampiomina Eloise Rasoanirina, 44, who works at one of Akamasoa's granite quarries.

"He is the second pope," piped Fara Lucy Rasoambolatiana, a school girl rescued when she was six.

The town's white walls contrast with the filth of Antananarivo's streets. Painted slogans say "No speaking, we are working."

Akamasoa sustains 18 villages, among them around 10,000 children. All of them have education, thanks to 37 schools the association has built since its founding. By GIANLUIGI GUERCIA (AFP)

At the top of the hill, in a dormitory reserved for new arrivals, old men abandoned by their families dozed in the sunshine after a meal.

Around 2,000 families go to the association each month for help and its schools in the town have over 14,000 pupils. School lunches are often their day's highlight.

"We are standing in for the state," said Father Pedro.

"I am in a constant state of revolt. I cannot accept this poverty because it has been created by leaders."

Since its independence from France in 1960, Madagascar is the only country in the world where poverty has increased despite the absence of war.

Around three quarters of the island nation's 26 million inhabitants live on less than two dollars per day.

"Having enough to eat is an event," Pedro said.

Hundreds of people in red blouses stood gathered in a gymnasium, queueing for a plate of rice or pasta under the building's plastic roof. There are no chairs or tables -- everyone eats on the floor.

Akamasoa relies on donations. Pedro has just returned from a trip to Europe to collect funds, which he hopes will last for the next eight or nine months.

"Some people in my religious community don't understand me," said the Father, alluding to individuals who prioritise their "career" over charity.

"But thanks to God, we have a Pope who loves the poor."

It would be "too hard" for the 82-year old Pope to descend into the quarry, explained Pedro, who was himself a pupil to Francis in Argentina.

Despite Pedro's hard work, issues remain. Akamasoa's houses have no running water and salaries remain low at around 30 euros ($33) per month. And the banning of alcohol, drugs, gaming and prostitution is not enough to prevent regular outbursts of violence.

To make ends meet, men, children and women carrying babies on their backs continue to sort through garbage in search of plastic and metal scraps.

"A forgotten population has stood up," said Pedro, a man of God whose successor remains a mystery. "But we remain very fragile."