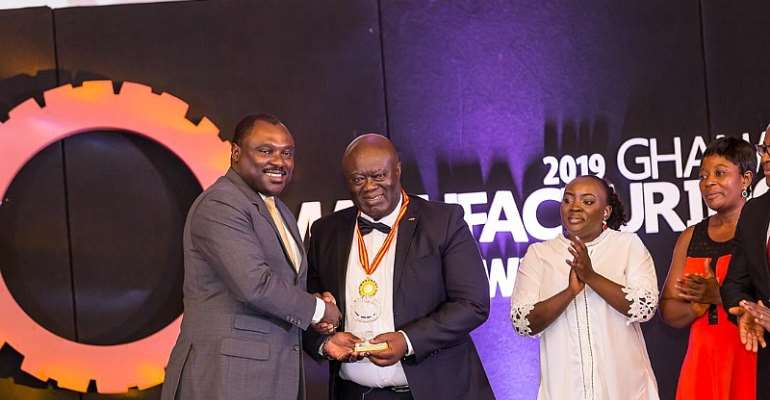 GIHOC Distilleries Company Limited (GDCL) has over the past 61 years perfecting the art of distillation, refinery, blending and manufacturing of various types of both alcoholic and non-alcoholic beverages for the local market.

Until Maxwell Kofi Jumah took over as the Managing Director of the entity, one could describe GIHOC as an extinct outfit whose demise was a result of poor management practices by those Managing Directors who came before him.

GIHOC had become a liability and an albatross on the State and this was as a result of several contributory factors.

The ramshackle manufacturing firm, when Kofi Jumah took over, was consistently running out of raw materials as well as finished products. It was a lifeless sight to behold. Even bottles for their products were not available. A lot of the Distributors left the company because they could not get products to sell. Poor management practices coupled with plain greed by management almost destroyed the Company.

WHAT IS THE STORY NOW? GIHOC has more than enough raw materials to produce drinks for itself and other companies. They have enough bottles at stock to last for three months if they don't wish to acquire new ones for a while. Improved, cutting edge technologies, processes and operational procedures are being codified for the company.

To say that workers at GIHOC had low morale would be the biggest hoax of the century. Workers are happy. The Company was bankrupt to the extent that it could not meet its GHS2 million tax obligations to the Ghana Revenue Authority who came to the premises to shut it down but for the intervention of the Managing Director. These tax obligations, a few months into office by Maxwell Kofi Jumah, have been honoured.

In the past, GIHOC made losses every year, up to 2016. It could not generate enough to pay it's own workers, leading to many of the workers being owed by the company for months before he took over in 2017.

With a strong marketing strategy and team in place now, GIHOC has been able to turn around that gloomy state and has been declaring profits since 2017.

In the past, GIHOC was reduced to an Accra-based company as its outlets and offices in the other regions were nonexistent. Now, the company has many outlets in the regions (GIDI shops).

His introduction of the Cocktail Unit, Events Unit and the Media Relations unit cannot be swept under the carpet since the Cocktail Unit has now apparently become the official cocktail sponsor of most state and private sector organized programs. Indeed the Cocktail unit did the Presidential Dinner in Liberia during the Independence Day celebration.

The Media Relations Unit within the shortest period has, through their social media outlets raised GIHOC to a pedestal that has never happened in the history of the company. Through the hard work of these new units, Gihoc is now in competition with world-class producers all over the world which was not so before the advent of the Kofi Ghana administration.

The Kofi Ghana administration has also introduced the Legal Department which hitherto was missing and was causing the company a great deal of money by contracting lawyers from outside to do their cases for the company. (refer to TAMAKLOE VRS GIHOC) SUPREME COURT in 2019.

The introduction of the Sales Supervisors and Sales Executive system is one thing that cannot be grossed over since the same has turned over the fortunes of the company.

The Event Unit has been given a live band that travels with them in almost everywhere they are invited and now GIHOC doesn't attend events by just branding the place but rather take charge of the place with their own in the house band. Attending festivals across the country to showcase the GIHOC brand has been the hallmark of the Events Team.

It must also be emphasized that there was no Export Office in the first place, let alone products being exported to neighbouring countries. Thanks to the ingenuity of Maxwell Kofi Jumah, GIHOC has a foreign desk with products exported to Liberia, Kenya, Tanzania, Burkina Faso, and La Cote d'Ivoire. Exports to Nigeria begin in October 2019. He has primed the Company to fully take advantage of the African Free Trade Agreements.

In the past, some workers were being paid GHS300 and GHS400 as wages and salaries. But now, no one, it must be forcefully stated, is receiving less than GHS1000 a month, not even cleaners. He insists that GIHOC is a Commercial Enterprise Incorporated by the Company Law, not Civil Service Laws. Performance is the key to advancement in the Company not degrees and it is working miracles.

GIHOC had a canteen which was not being used for ten years. It is now functioning, with its own large screen TV and other modern facilities, thanks to the managerial skills of Kofi Jumah. Workers have their meals subsidized by the company at the canteen.

Looking at the tedious nature of the work done by the workers, the Managing Director has acquired a massaging chair which workers regularly use to keep themselves in shape and good health at their much improved in house clinic with a nursery for young mothers.

Workers at the establishment are full of praises for their Managing Director who they say is friendly, accommodating, hard-working and respectful.

To motivate workers the more, the Managing Director of GIHOC has ensured that ordinary workers nominated by the workers themselves have been included in the foreign trips of the company. This, according to the workers, is a novelty and a dream they never imagined could happen.

Some of the workers opine that they would wish that Kofi Ghana (Kofi Jumah) would stay on for so many years as he is the best MD they have worked so many years.

"There's tension-free here. MD eats with us at the canteen. He welcomes us in his office without the usual bureaucratic rules that used to be the case here. We've had our salaries increased, what more could we ask for? We want him to remain here forever" a worker at one of the facilities of the company said.

Maxwell Kofi Jumah, according to the workers, is a workaholic, as he is always the last person to leave the premises every day.

GIHOC is in its heyday. It is one of the more profitable companies in Ghana now. It generates more than enough to pay its workers, operational costs and can boast of enough funds in its accounts. it is declaring dividends and paying to the government for the first time in decades.

The change in the fortunes of GIHOC has been accentuated by the awards the company and its Managing Director have won so far.

One wouldn't need to be a genius to come to the conclusion that Maxwell Kofi Jumah is God's gift to GIHOC. An establishment many declared as dead, Kofi Jumah has resurrected and breathed into it an air of hope, and the results have shown that indeed, GIHOC has Kofi Ghana as its messiah. Visit the company and see it for yourself.