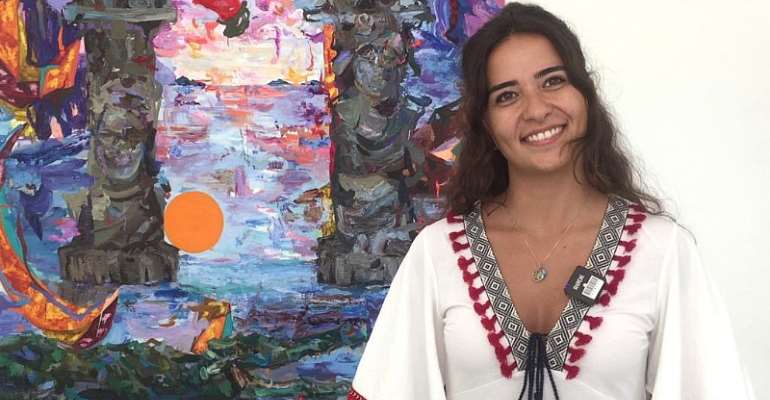 Myriam Haddad's paintings are thickly layered in bright cheery splashes of acrylic colour. However, some darkness lurks behind the stunning strong shades and deceivingly placid figures. Her works are at the Lambert Collection in Avignon until the end of September 2019 in an exhibition called, 'Sleep is not a safe place'.

Some elements from the selected painting, called 'Agonia', found themselves transferred to other licenced products for the Avignon Festival. The 2019 souvenir cloth bags for example bear a crocodile, smiling or dangerous... and a simple round orange shape. While you have to search for the crocodile among the tons of chaotic forms and contrasting colours in 'Agonia', the plain orange disc leaps out of the painting. Ambiguity, potential and openness are key to Haddad's approach and work.

“I've been painting a circle in most of my recent paintings. People see them as the sun or the moon. I find that very poetical, but actually I was thinking of something else,” says Haddad.

“On some Arabic letters, there's a dot. That's an important symbol for me. But then, when I painted the first spot, it was over a figure lying down. It was as if I had brought the soul out of the figure and it was suspended in mid-air,” she adds.

Would it go back inside the body or float away? “Anything is possible. That's where my idea came from to paint only bodies without souls; disguised, very colourful and with loads of energy. And the soul, in limbo, a question mark,” she says.

All the canvases are brimming over with brushstrokes and colour, creating a rough texture like a wild sea. Another major canvas hanging in this exhibition in Avignon is called 'Vengeance'... like 'Agonia', more nightmarish than dreamy.

“When I began painting I put lots of colours and paint, a lot of material. In Syria at the beginning, I didn't know much about art history. So my technique was instinctive. Later on, the colours became stronger, more powerful, more present,” says Haddad.

“Also, these colours convey a sense of joy, festivity, and hope. This should keep viewers looking at the painting, and help them discover the ambiguity of colour; how the same colours can be more violent, more harsh and difficult to accept. If the viewers stay longer perhaps it becomes easier to accept.  I think it's important for art to play with these emotions,” says Haddad.

Displaced people
In front of the dozen works in the exhibition at the Lambert Collection, people come and go. Some linger over the larger formats while some are so assaulted by the intense lashings of colour and depictions thickly spread over the canvas, they move on quickly.

Haddad paints huge museum-space pieces, others are tiny, the size of a computer tablet. Haddad says it is her response to the way people appreciate art work these days.

“I think it's quite interesting for visitors to look at two aspects, two extremes of a painting. You should look at a painting close-up as well as at a distance. When you look close up it appears abstract, and as you get further away you can discover figures, elements, places, spaces. I know which elements I want to be clear in a painting,” she says.

As the exhibition title suggests, 'Sleep is not a safe place', the images in Myriam Haddad's works, as intriguing and eye-catching as they are, can be disturbing. Haddad was lucky to study in Paris and is now resident in France. She says these works were mostly inspired by the Festival's mythical Odyssey theme.

Nonetheless, far from being part of mythology, war continues to rage in parts of her native country, Syria. It is hard not to imagine that the conflict has affected this budding and exiled artist's compelling work.