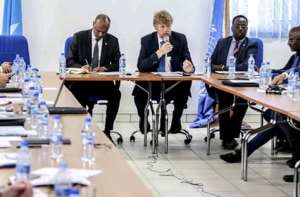 The political climate in Somalia today as it has been in many generations before is that reform or the new agenda for prosperity means borrowing more money from the World Bank and other International financial institutions to pay for nation building projects and public services.I am generally not faulting or blaming our government for requesting donor assistance at this challenging time because i know they are financially cash strapped with limited choices and resources.

The underlining problem is that Somalia fundamentally needs a new direction when it comes to our dependency on donor money or foreign Aid. Many Somalis share a greater understanding that our emerging governance system, like many other African countries, do not have the resources, financial structures and expertise to radically depart from our addiction to foreign Aid and if we suddenly remove ourselves from outsider's support it means we are doing more harm than good .

It is also true that decades of instabilities, the poor governance and the lack of strategic alternatives to foreign aid have kept the prospect of a donor-free Somalia far from possible. That government institution which brings in revenues needs a serious overhaul, broader transparency with an effective accountability mechanism before potential revenues can be properly streamlined to internally support public projects.

Indeed, how about doing business differently where our economy is not driven by donor dollars but rather by an export oriented market, a robust manufacturing industries link to our natural resources with more modernized and transparent financial infrastructures. I believe, we as a country and people, can do miracles if we seek to build a future where economic prosperity transcend poverty and where progress overcome corruption and ineptitude.

The issue of foreign Aid is classified into two categories: one is how effective has our government managed these resources for the overall good of its citizens and secondly what plans do we have to gradually wean ourselves from the dependency of the so-called donor money?

As true as it has been that international financial support have helped us somehow in the past – the horrible monster of AID money have caused a major devastation to our political and economic landscape.The perception we inherently get over the past four decades is that we have been reduced to a “beggar nation” and more importantly our decisions are tied down or influenced by how these donor countries or financial institutions wants us to operate our government institutions.

"Donations are not free because foreign aid comes with lots of regulations and investment interests."

Unfortunately, most politicians see “aid transfer funds” as a welfare check to benefit them and their families not to the Somali People. Indeed, Economically no nation has grown through aid but through policies that increase employment and international investments. Donor money has caused more death to the future of Somalia than the epidemic disease of Aids has caused in some parts of Africa.

Somalia, like other African nations, have poorly managed these resources, raised the debt to the ceiling and weakened our international borrowing credibility. Aid has brought misery, enriched corrupt public servants and eroded trust in government. This is the evidence of what foreign aid has done to Somalia for the past forty years.

It is time to do away with donor money and introduce a trading system.

I am describing trade with our neighboring countries and the developed world not the photo-opt trade conferences that produces just handshakes, but trade that establish the movement of goods and services which economically benefits participating nations. I mean a demand and supply system where trading countries maximize their potential earnings and double their national revenues.

I am advocating for a greater reliance on trade and a market oriented economy as oppose to the old tricks of the Western World’s false pretense of finding solutions to Somalia’s failing economy in the name of making profit for investors and shareholders of their financial institutions (World Bank and IMF).But we cannot blame these financial institutions for promoting their interests, Somalia makes the decision about what it wants to do and we must take ownership of our own future. The fault is more in our “stars” and not the technocrats across the great Atlantic Ocean who sits at the World Bank in Washington D.C.

This brings me to the center piece of my analysis: Somalia needs Trade not Aid. First, as a country, let us agree that Aid is a quick-fix solution. It comes with a lot of challenges and obligations. It has failed to work because it does not address long term solutions. We must replace it with a common sense solution. If we change our mind set and move to the new strategic planning of accumulating foreign reserves like how the Chinese, Indians, Botswanans, Ghanaians and other nations are doing – our economy will grow at a faster rate.

If we seek to create an account surplus with the revenues we get from our resources and move forward to purchasing treasury bonds, equity and other investment assets at international level, we can certainly replace aid with trade. If we make our existing or soon-to-be trading partners a more vital source of revenue creations, millions of our people will benefit from such profitable ventures.But visiting the developed world every month for conferences is not what we call trading partnership.Exporting our natural resources in exchange for money or other investment opportunities are potential trading relationship.

"The road to economic independence lies through the gate way of a stronger trading and financial investments on the international market."

Government workshops and blue print plans that describe the guide line to poverty reductions or the UN Millennium goals are just as good as the implementation effort and our ability to accomplish them. What Somalia predominantly lack from a constructive standpoint, is the political will to influence changes. The lack of national focus and the increasing obsession of running government as an investment firm rather than a public service responsibility are the obstacles to the growth and development of our economy.

Furthermore, the issue of management capacity and the structural discipline to follow through on our national development agenda is another challenging phenomenon. As African President puts it: “the problem in Africa is not the lack of resources, but a poorly managed system.” Righteously, we have to overcome these obstacles and our public officers must have the character and vision to impact lives on a national scale.

Sound economic growth is what nations need in their effort towards tackling poverty. Asian nations did this and today, they serve as lead examples.

Today, China and India constitute unprecedented stories of economic development. They are increasingly reaching the heavy weight status in the global economy. And two factors that are helping them: manufacturing and trade.

They do not rely on aid but global trade with Europe, Japan, India, U.K. Brazil, Mexico, Turkey and Argentina which are among the top 15 nations that have the world highest GDP.

While China and India are both large economies, the parallel I want to make is that they too have poverty, some political turmoil and even an underperforming economy in the past. However, the reforming of their financial systems, growth in the agricultural, manufacturing and service sectors, their huge trading surplus and the accumulation of foreign reserves transformed them into the “new emerging economic powers” today. It is a wide illusion to believe that we can develop our nation through aid alone and not using our human capitals with serious reform policies to follow the economic trend of other advanced market economy.

On the other hand, it is true that we are partly to be blamed, because we do ask for these donor supports and used them for the wrong reasons. Somalia, like many other African governments, care less to read the “fine prints”, on the terms or conditions of these concession loans particularly the high interest rates these loans carries. Apparently, due to lack of financial planning and the lack of proper oversight in managing these loans, the ability of the government to repay them becomes a daunting and difficult reality. And Somalia systematically winds up owing the world financial community.

Indeed, widespread corruption and poverty have become a stumbling block to implementing loan guaranteed programs let alone aid money. That is why, I think government should gradually and sensibly eliminate donor money and begins to create a market economy where trade is the new guiding premise to our nation’s future. We must abandon the culture of using government assets as a personal checking account, but rather utilize our natural resources for the good of society.

Somalia is a small economy that can be developed if we focus on two elements: human capital and trade. It has abundant of what we need to trade So lets go to work.The question is where can we raise the capital and the investment assets to build a manufacturing nation. If we managed our natural revenues properly with a corruption-free practice and sound fiscal discipline, we can easily fund or pay for public projects and services without relying on Loans, Aid or Donor dollars.

The Government must focus on revenue creation and accumulation of surplus for national savings. These new economic behaviors, if implemented will significantly reduce the need for “outside donors.”

We just cannot become consumers alone expecting to create jobs and economic growth for our people. Rather, we must create income through trade and other commercial ventures. What we lack is not the ideas to find solutions to our economic problems, the problem is when and how can we build a financial system, like other developed nations, that would break away the cycle of poverty and social deprivation we have witnessed for so long.

We are never eager to take a new approach to alleviating our human suffering. Many of us are always interested about what opportunities are available for us and our family. We must begin to realize that access to new opportunities and the attitude of doing things differently can open the doors to many good things for our beloved nation.

But we must look beyond the psychological threshold of individual growth and know that developing a nation comes with the strong character of thinking about others. And we must agree together with one voice that Somalia needs trade and not aid.

If political independence came with a struggle and pragmatic leadership, economic independence must take a similar course. This time must be fought with idealism, innovation and 21st century fresh thinking. This is the future Somalia must seek to build.

May our nation continue to be the realm of the free!

Five die in accident on Techiman –Tuobodom highway
8 minutes ago