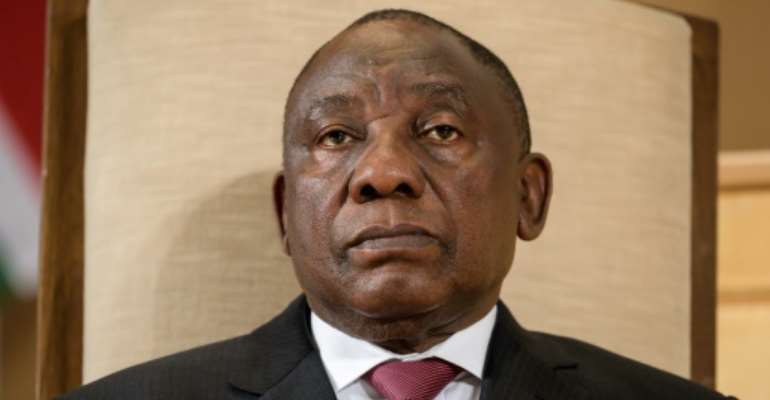 South African President Cyril Ramaphosa said "enough is enough" and vowed to act in the face of a rising tide of violence against women. By Fabrice COFFRINI (AFP/File)

South Africa's President Cyril Ramaphosa on Thursday vowed to tighten laws to fight rape and murder of women as the nation reels from high profile murders in recent days.

In an impromptu address thousands of protesters outside parliament, Ramaphosa admitted that it was time his government took emergency measures to deal with the scourge of rape and murder of women.

At least 137 sexual offences are committed per day, mainly against women, according to official figures.

Women Minister Maite Nkoana-Mashabane, said this week that more than 30 women were killed by their spouses last month alone.

"Enough is enough and we are going to act," said Ramaphosa, promising to announce later Thursday a raft of new measures his government will take.

"Men that kill and rape must stay in jail for life.

"The law must change that once you have raped and kill you get life, no bail!" Ramaphosa told the angry crowd.

Thousands of women have held two days of protests in Cape Town, scene of two recent high-profile murders of young women, to highlight the growing level of gender violence in South Africa. By RODGER BOSCH (AFP/File)

Thousands of women protested for a second consecutive day in Cape Town at rallies prompted by last month's brutal murders that have triggered outcry and much soul-searching in a country that is seen as one of the world's most dangerous places for women and often appears numb to murder and sexual violence.

In one case University of Cape Town student, Uyinene "Nene" Mrwetyana, 19, was raped and bludgeoned to death when she went to a post office on August 24.

And on Friday boxing champion Leighandre "Baby Lee" Jegels, 25, was allegedly shot dead by her partner, who was a police officer.

"Parliament must make a decision on declaring this a state of emergency," said Ramaphosa, who left the World Economic Forum meeting in Cape Town early to accept a memorandum delivered to parliament by a mass demonstration of mainly women.

"I agree completely that the killing of women must be bought to an end here in South Africa," he added.

On Wednesday around 500 women demonstrated against South Africa's "femicide epidemic" in front of Cape Town International Conference Centre, where a three-day World Economic Forum on Africa was opening.

Last year South Africa recorded a 6.9 percent increase in the number of murders countrywide, with an average 57 murders committed each day.